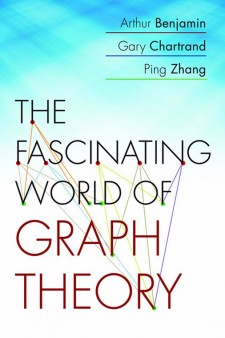 The book is intended to appeal to a broad audience.

KALAMAZOO, Mich.—Western Michigan University's international reputation on the topic of graph theory is on display in a new book published recently by Princeton University Press.

"The Fascinating World of Graph Theory" is a book by Dr. Gary Chartrand, professor emeritus, and Dr. Ping Zhang, professor, both of the WMU Department of Mathematics. The third co-author is Dr. Arthur Benjamin, mathematics professor at Harvey Mudd College. The book was introduced with a book signing this winter at a meeting of the American Mathematical Society in San Antonio.

Graph theory, a nearly 300-year-old discipline considered an element of discrete mathematics, is used to model many types of relationships and processes in physical, biological, social and information systems. The book is designed to introduce the field to a broad audience and to also serve as an introductory textbook.

"The idea was to write a book for a more general audience illustrating that math can be fun by showing that graph theory can be used to analyze and solve a variety of curious problems," Chartrand says. "We also wanted to show that mathematics is something people create, and so we wanted to discuss some of the people and history of this subject."

Graph theory has a long history at WMU, Chartrand notes, beginning some 50 years ago in 1964. The Journal of Graph Theory was originally edited at WMU, and the University hosted nine international graph theory conferences—one every four years—from 1968 to 2000.

Chartrand retired from WMU in 2004 after more than 40 years as a faculty member and researcher. He and Zhang have been working together since Zhang joined the WMU faculty in 1996. They have been co-authors of four previous books.

Benjamin, their co-author on the new book, is a longtime advocate for making mathematics more accessible to a general audience, and he does frequent mental math presentations, calling himself a "mathemagician." The creator of four video courses in the Great Courses series, Benjamin also has been a guest on "The Colbert Report."