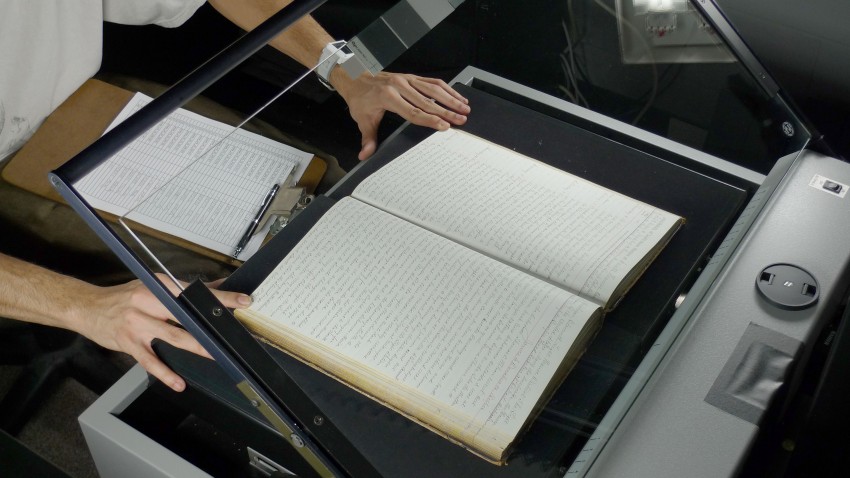 KALAMAZOO, Mich.—Whether an account of a body washed ashore, a shipwreck in rough waters or an inferno on the mainland, the life and times of lighthouse keepers in South Haven are being brought to a wider audience through the digitization of three carefully preserved logbooks by technicians at Western Michigan University Libraries.

Called the South Haven Michigan Lighthouse Logs, the new digital collection is being created to give a lifelike representation of lighthouse journals spanning the years 1872 to 1880. The hand-written logbooks are being painstakingly digitized in high-resolution, tagged image file format—TIFF—images, giving as close a representation of the original logbooks as possible. The processed images are then made available in an onscreen, page-turning "BookReader" format. The team of library science professionals also is adding complementary metadata to the three-book collection to aid in searching for or finding online resources to help fill in or complete data required for scholarly research.

The project represents one of the first comprehensive digital lighthouse logbook collections to be publicly available online anywhere. The images bring to scholars and history buffs alike the logbook entries of James Donahue, who served as the keeper of the South Haven station for most of the period the digitized logbooks cover. Donahue took over for an earlier keeper, Capt. William P. Bryan, who completed the first entries. The digital image capture is being conducted to illuminate the daily activities of the light keepers station on South Haven's Lake Michigan shoreline.

From mundane to high drama

The entries run the gamut from mundane observations about the weather or notations about schooners being unloaded to dramatic notations of danger, death or imminent peril.

Take, for example, the first three entries by James Donahue (with the original spellings and punctuation uncorrected) starting in August 1874: 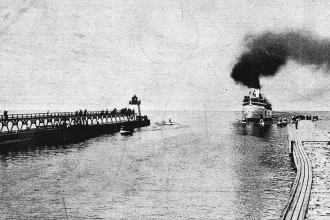 The South Haven lighthouse, circa 1908

The three logbooks were donated by the Van Buren County Historical Society and have been held in the WMU Archives and Regional History Collections for many years. Library staff put the logbooks on microfilm, but the microfilm copies did not lend themselves to thorough examination of the logbooks in all their complexity, says Dr. Sharon Carlson, director of WMU Archives and Regional History Collections and associate professor of University Libraries.

"We've tried to make the content available and have tried to be very responsible in preserving them," Carlson says. "And now the responsible thing is having a digital copy and making them more accessible to a broader audience."

The lighthouse logbook project comes on the heels of the libraries' recent digitization of Civil War diaries and letters. It also dovetails nicely with the 2015 Reading Together effort led by the Kalamazoo Public Library and this year's book, "The Living Great Lakes" by Jerry Dennis.

The Donahue family has also donated the logbook for wicks and oils used for the lighthouse lamp and donated it to the history collection. That historical record also may one day be digitized.

Throughout the logbooks, Donahue maintained detailed entries about his daily activities and tasks in the light station. In addition to weather observations, he noted the names of the owners of incoming vessels, lighthouse maintenance, accounts of the commerce and pleasure crafts passing in and out of the harbor and descriptions of shipwrecks, including the name of the ship and fate to the crew, such as this entry from May 11, 1875: "Thay is a report that the schooner D.G. Wright went ashore in the night and all hands lost twelve miles north of this placed the wind blowed fearfull from half past ten to twelve (midnight)." 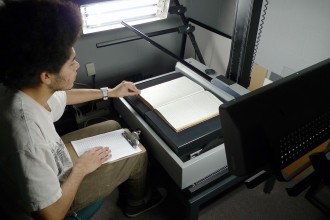 Donahue also shared intimate details into the lives of his family and sometimes community members, noting deaths in the community and the occasional body washing ashore. He also mentions the lumber trade and other activities associated with commercial shipping.

"There are many treasures in the Regional History Collections," says Lou Ann Morgan, library communication coordinator. "This is one of those that floated to the top. For these to be publicly available in a comprehensive online collection is a key part of the delivery of this project. Essentially, it's not just being digitized. It's being published on the image database."

The project provides insight into Michigan and maritime history, historical weather observations and a historical record of commerce in what was then a fairly busy port. The logbooks also shine a light on life in general in the late 1800s in a Midwest coastal community.

Digitizing the logbooks has been an arduous process, says Paul Howell, University Libraries manager of digitization and systems. The number of man hours required is "in the hundreds for sure" and gave the students involved valuable experience in imaging, transcribing and quality control.

"This has been an interesting project," Howell says. "And it is somewhat complex."

Donahue was born in Vermont in 1842 and enlisted as a private in the U.S. Army in 1861. Wounded at the Battle of James Island, he nearly died, but recovered and went on to fight again. He rose to the rank of captain and was wounded again in the Battle of the Wilderness, resulting in the loss of his leg. Though he only had one leg, he is credited with saving 15 lives, including two of his sons.

Donahue's lighthouse journals, succinct and to the point, give the impression of a sociable and courageous man dedicated to his duties.