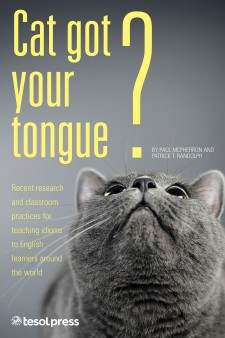 The book is co-authored by Patrick T. Randolph and Dr. Paul McPherron.

KALAMAZOO, Mich.—Many students cram for exams by "burning the candle at both ends."

But that doesn't mean non-native English speakers aren't "thrown for a loop" when they hear that idiom or that their instructors are "primed and ready" to discuss literal versus figurative language.

The situation could change in time, though, with the aid of books such as one penned by Patrick T. Randolph, a faculty specialist at Western Michigan University's Center for English Language and Culture for International Students, and Dr. Paul McPherron, coordinator of the undergraduate English as a second language program at Hunter College of the City University of New York.

"Cat Got Your Tongue?: Recent Research and Classroom Practices for Teaching Idioms to English Learners Around the World" was released last year by TESOL Press.

The press is the publishing arm of the Teachers of English to Speakers of Other Languages International Association. TESOL accepted "Cat Got Your Tongue?" for publication after inviting scholars around the world to submit proposals for idiom books that are teacher-friendly and founded in research-based classroom practices. It's now made the publisher's best-sellers list.

Among several unusual aspects of the book is its global perspective. Randolph and McPherron surveyed students and teachers from several countries. The two heavily incorporated the respondents' feedback into the second half of the book, providing varying views on what does and doesn't work when teaching idioms as well as on which idioms are harder and easier to teach.

The book reflects Randolph and McPherron's belief that teaching about informal expressions and other figurative language is not only necessary, but proper fodder for academic researchers—a belief that's contested by some scholars.

"You don't have to say anything to the students. They know how important idioms are and they want to learn them," Randolph says. "Paul and I have always taught idioms. That's why we were so happy when we got the results from the surveys. A lot of teachers do believe that idioms are important."

A matter of meaning

Randolph says doubters of the need to address idioms usually say it's because such phrases are used primarily in informal speech, are rarely uttered or written in academia, and don't stay in vogue long.

"Paul and I thought, well, cat's got your tongue—that dates back to the 1800s," he says. "Spill the beans—the Greeks used that in their voting system, so if you spilled the beans, I guess people knew who was going to be elected."

In terms of idiom usage in academia, Randolph adds that he's occasionally found the expressions in even highly technical neuroscience articles. But he notes that he often hears idioms being used on college campuses. In one instance, he recalls attending a formal, 50-minute lecture on archaeology at Michigan State University and counting 142 single and repeated uses of idioms.

"If one of our students is sitting in a lecture and somebody's talking about the government 'falling back on' some kind of a policy, the student's thinking, 'Fall back on what?' It throws them, so they fixate on that," Randolph says. "Maybe it's only for 10 seconds, but now that's 10 seconds of the lecture that they've totally missed. Their English level can be very good, but so much gets lost. The instructor says, 'The policymakers seem to be barking up the wrong tree,' and again, that's going to throw them."

To help make the point, "Cat Got Your Tongue?" includes an appendix with dozens of examples of idioms and how they're used.

Listed last are idioms the book's survey respondents say are the most difficult to learn. Among the students' top picks are "red herring," "dog days," "the bottom line" and "pull something off." The teachers' list includes "in your face," "run for office," "tip of the iceberg" and "take a shower." 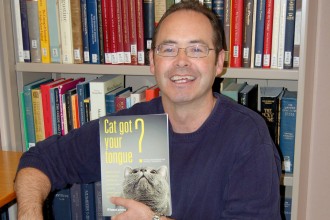 Randolph with a copy of his book

Randolph and his research were recognized by TESOL when he was one of just seven scholars selected from some 5,300 presenters worldwide to win the association's 2015 affiliates award.

As such, he was among those invited to present a session at the TESOL International Convention and English Language Expo, Wednesday through Sunday, March 25-28, in Toronto. This was only the second time Michigan had been so honored and the first time for WMU.

The method aims to conquer a memory conundrum identified by German psychologist Herman Ebbinghaus in the 1800s that has been materially confirmed by subsequent researchers.

"Within a 30-day period, the average person will forget up to 90 percent of what they've learned. But what's really depressing is they forget most of that within the first week," Randolph explains. "That's a big thing when it comes to vocabulary. They remember it for tests and then they forget it."

He says Head-to-toe draws on neuroscience research to teach vocabulary words in a visceral way. Teachers act as guides, helping students connect words to their individual emotions and memories.

"You need more than repetition, you need emotional involvement, sensory integration, and to teach and talk about the material—REST, for short. So I'll ask my students things like, 'What color is the word coherent?' or 'What memory do you associate with it?'" Randolph says.

"I'm trying to get them to look at one word from so many different angles that if they forget even half of them, that's OK. Because ultimately, they'll remember the word. One of my students who's a nursing instructor is interested in trying this method in Brazil, and a teacher in India is starting to use it with her K-12 kids. They like it because you don't need technology. You just work off the history of the students to help them recall vocabulary words."