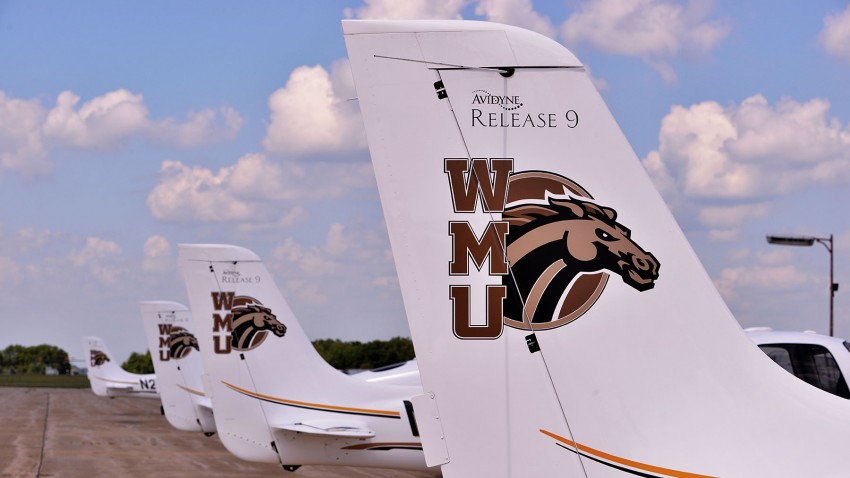 KALAMAZOO, Mich.—A Western Michigan University alumna has established a $25,000 annual scholarship at her alma mater's College of Aviation to provide an opportunity for a West Michigan Aviation Academy student to earn a bachelor's degree in flight science.

Kelly K. Burris has established The Burris Family Flight Science Scholarship, which provides $25,000 per year for a term of four years for a WMAA student who meets the scholarship criteria to pursue a flight science degree at WMU. Burris is managing shareholder of the Detroit office of the law firm Brinks, Gilson & Lione. She also is chair of the firm's Green Technology Practice Group.

"We were delighted to discover the marvelous programs and opportunities being provided at WMAA to students excited about aviation," Burris says of the decision to launch the scholarship initiative. "The students are impressive and well-grounded, and we believe Western Michigan University can provide the critical next steps to launch what promises to be challenging and rewarding careers in aviation for WMAA graduates."

"We are so grateful to Kelly Burris for her enormous generosity," says Dick DeVos, president and founder of the West Michigan Aviation Academy, which is located on the grounds of the Gerald R. Ford International Airport in Grand Rapids. "When we started WMAA only five short years ago, our goal was to give more opportunity to more young people. That opportunity has now gone to new heights."

Capt. Dave Powell, dean of the WMU College of Aviation notes there is a longstanding collaborative relationship between his college and WMAA. He expects the new scholarship program to have an impact on the collaboration.

"With the commitment of Kelly Burris for this incredibly generous scholarship, a barrier has been removed for a student from the WMAA who will be able to realize his or her dream to become a professional aviator," Powell says. "The long-standing partnership between the WMAA and WMU has been made even stronger by her generosity and her commitment to aviation education.”

"It never ceases to amaze me the generosity of people when it comes to helping young people accomplish their dreams," says Patrick Cwayna, CEO of WMAA. "What the Burris Family Flight Scholarship will do is give one of our WMAA students the opportunity to literally soar to a career that otherwise may not be possible. We are so grateful to Kelly and her family and to Western Michigan University for making this happen."

Burris is a 1988 aeronautical engineering alumna of WMU and an experienced pilot. Before beginning her law career, she spent more than 11 years in the aerospace industry with McDonnell Douglas and Boeing. She is a volunteer pilot and member of the board of directors of Angel Flight Central, providing free air transportation to specialized health care facilities, and she has done pro bono legal work with several organizations that support women in aviation.

The West Michigan Aviation Academy is a tuition-free public charter high school founded by Dick DeVos with the encouragement of his wife, Betsy. The school opened its doors in the fall of 2010, with 80 freshmen students welcomed into a 25,000-square-foot renovated office space that served as the first school building on the airport grounds. It wasn’t long before expansion plans were on the drafting board. After the addition of a new 42,500 sq. ft. building, the WMAA has the capacity to educate 500 students, enjoys enrollment close to 400 students and graduated its first class in 2014.

Founded in 1939, Western Michigan University's College of Aviation is among the oldest such colleges in the nation. The college offers the only comprehensive aviation program at a public university in Michigan, and with more than 700 undergraduate students, it is one of the largest aviation programs in the nation. The college offers state-of-the-art facilities and training equipment for students studying in one of three degree programs offered—aviation flight science, maintenance technology and aviation management and operations.