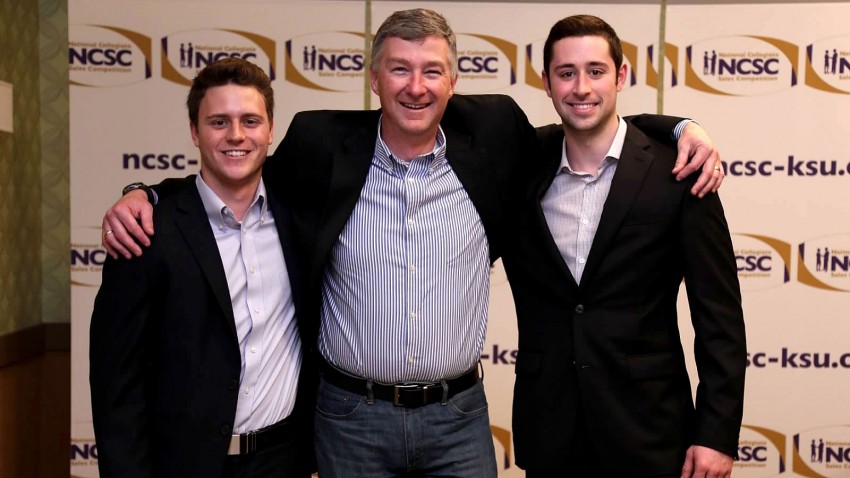 From left: Kirk, Eckert and Kobliska

This marks the eighth top-10 finish and the sixth top-five finish in the 11 years WMU students have competed in the National Collegiate Sales Competition. The annual competition is hosted by Kennesaw State University in Kennesaw, Georgia, and is widely regarded as the nation's largest and most competitive university sales competition.

Ted Kirk of Walled Lake, a senior graduating in May, was awarded $1,500 for coming in second on the individual level out of 134 students. Fellow WMU senior Steve Kobliska of West Bloomfield, who also is graduating in May, finished in the top 25.

The event consists of a tournament where students compete to move on to the next round. Kobliska made it to the quarterfinals and finished as one of the top 24 students. Kirk moved all the way to the final four before finishing second. The students were coached by Dr. James Eckert, associate professor of marketing.

"The National Collegiate Sales Competition is a great way for the Sales and Business Marketing Program to go toe to toe with the other top university sales programs and see how we stack up," Eckert says. "Once again this year, we were able to show we are an elite national program."

Each round has a different scenario so the students must be highly prepared and adaptive to move successfully through the rounds. Judges are industry professionals and sales faculty.

Since mid-January, Kirk and Kobliska have been meeting twice a week with Eckert, oftentimes more, for practice, Eckert says. They also have put countless hours in on their own.

"Ted and Steve could not have represented what selling the WMU way is all about any better," Eckert says. "They were adaptive, relationship focused and smartly persistent. Throw in calm under fire and actually fun to be with and it was no surprise they did so well."