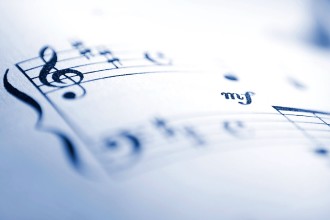 KALAMAZOO, Mich.—Western Michigan University's University Chorale and new music ensemble Birds on a Wire are featured performers on the newly released album "Contemplating Weather," a collection of works by renowned composer Paul Lansky. The album was released on the Bridge Records label. It will be distributed internationally and is available for purchase or download through Amazon.com, iTunes, eMusic, Classicsonline.com and other retailers.

"Contemplating Weather," the title inspiration for the album, is a multi-movement work for choir and chamber ensemble by Paul Lansky. It was premiered in 2014 by University Chorale and Birds on a Wire, and conducted by WMU faculty member Dr. Kimberly Dunn Adams. The piece was subsequently recorded locally on WMU's campus. In addition to the title work, the album features performances of Lansky’s "Travel Diary" and "It All Adds Up" by the Meehan/Perkins duo and Quattro Mani. Grammy-nominated producer and classical guitarist David Starobin produced the album.

Dunn Adams, WMU's director of choral activities spoke highly of the students saying, "The work our students did on this album is of the highest caliber.They brought professional-level musicianship and discipline to their performance of this piece, which—combined with their energy, enthusiasm, and fresh voices—makes for a truly
remarkable recording."

She added, "It's not often that college ensembles are featured as performers on commercially distributed albums, backed by a label with the prestige of Bridge Records. This is not only a significant accomplishment but an incredible opportunity for our students."

University Chorale and Birds on a Wire

The University Chorale, directed by Dunn Adams, is WMU's flagship choral ensemble and represents the university at home and throughout the world. The chorale has long been recognized as a top choral ensemble on the national and international stage, most recently taking second place in the American Prize Competition.

Directed by Dr. David Colson, Birds on a Wire is comprised of graduate and undergraduate students from the School of Music and is dedicated to the performance of contemporary music, collaborating regularly with guest composers.

Bridge Records, Inc. is an independent record label based in New Rochelle, N.Y. that specializes in 20th century classical music. This year Bridge Records topped all classical labels with four Grammy nominations, and a fifth nomination for David Starobin as Producer of the Year.