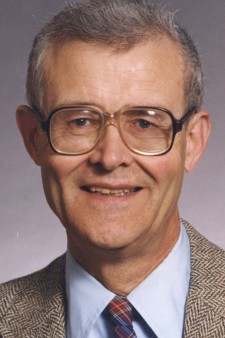 Syndergaard joined the Department of English faculty in 1968 and retired in 2000 after 31 years of service. During his tenure with the department, he served as associate chair for undergraduate studies, which included advising and program development duties. He was active in the WMU chapter of the American Association of University Professors, as well as the Western Association of Retired Faculty.

Syndergaard was actively involved in WMU's Medieval Institute and its long-standing International Congress on Medieval Studies, chairing many congress sessions and serving on the event's program committee. A fellow of the International Ballad Commission, his research into folklore and Scandinavian ballads resulted in dozens of scholarly papers and articles, as well as a book titled "English Translations of the Scandinavian Medieval Ballads."

Cremation has taken place. A memorial service and celebration of his life is planned for 1:30 p.m. Sunday, May 31, in WMU's Fetzer Center.

Messages to the family may be left at avinkcremation.com.