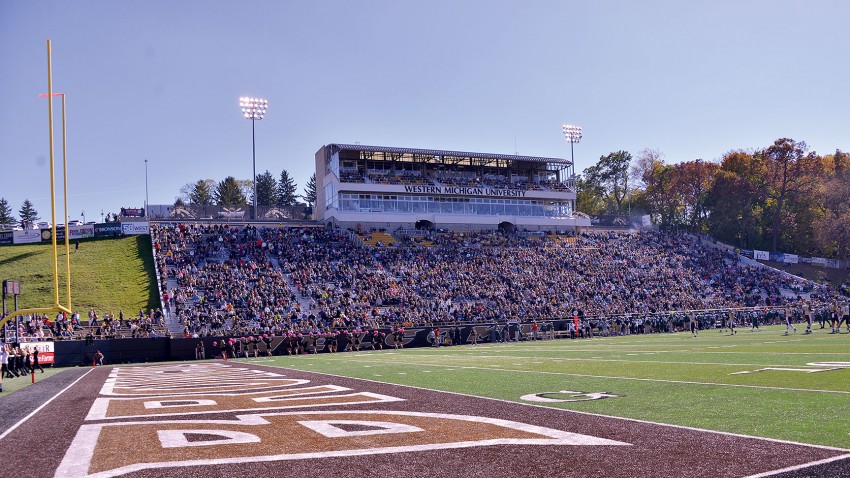 KALAMAZOO, Mich.—With Western Michigan University's spring semester in its final days, WMU students are looking ahead to the start of the fall semester and making plans for a highly anticipated Sept. 4 home football game against Michigan State University.

WMU's Division of Intercollegiate Athletics this week announced the launch of an online, random lottery to determine which 7,000 WMU students will get a free game ticket to the matchup in Waldo Stadium. The Broncos host the Spartans on Friday of Labor Day Weekend in a game that will be the season opener for both teams. While an official start time has yet to be determined, an evening kickoff is likely.

"Our goal in creating the lottery is to ensure each student who is enrolled this fall and wants to be included in ticket consideration is provided an equal opportunity to be selected to receive a ticket for this game," says Monty Porter, senior associate athletic director. "We want students to know well in advance of game day if they will receive one of the limited number of student tickets available, so each student can make plans accordingly."

Any of WMU's 24,000 students are normally admitted free to Bronco regular-season athletic events simply by showing their Bronco ID and having it validated for admission. The MSU game is one of the rare exceptions to this policy because of the anticipated demand for the 7,000-seat student section.

A lottery registration site is now open at bit.ly/1AmELs7 on the WMU Bronco Tickets site for students. Those who register for the lottery will receive email confirmation of their entry into the lottery. The registration deadline is Monday, Aug. 3. Once the lottery has been conducted, student winners will be informed via email, and their WMU Bronco IDs will be validated for entry to the game at Waldo Stadium Gate 8.

WMU students who are not successful in obtaining a free ticket through the lottery will also be notified via email, and their registrations will be retained for use if additional student tickets become available. Any WMU student who is not selected for the student lottery may purchase tickets when the general public single-game tickets become available. If seats are available in the public seating areas of the venue, single-game tickets will go on sale Aug. 10—a week after the WMU student lottery is completed.

The WMU versus MSU football game is one of the most highly anticipated sporting events to reach the Kalamazoo community in recent years. Under third-year head coach P.J. Fleck, WMU is coming off an eight-win season, a bowl game appearance and back-to-back recruiting classes that have been touted as the best ever in the history of the Mid-American Conference. The 2015 Broncos will see the return of many players from the successful 2014 team, including nine All-MAC players. Michigan State concluded the 2014 season with a Cotton Bowl victory over Baylor and a No. 5 national ranking. The Spartans are expected to receive a similar top-five ranking to begin the 2015 season.