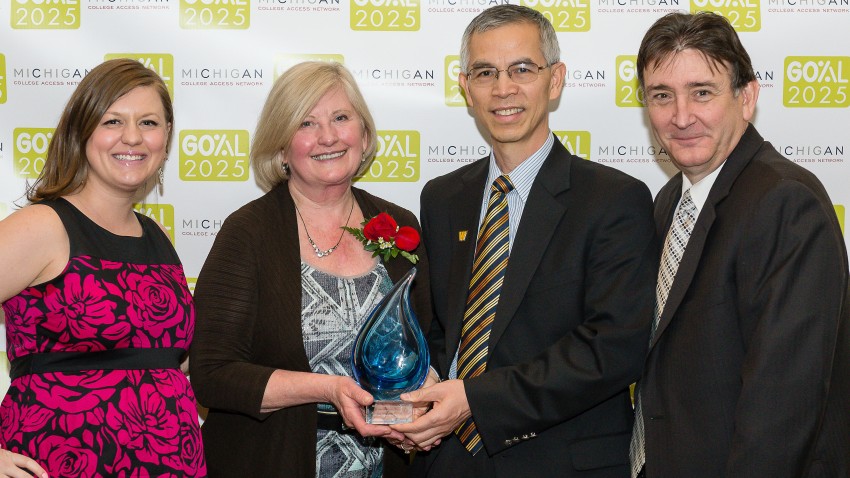 KALAMAZOO, Mich.—Western Michigan University is one of six "outstanding" college access advocates that have received awards for their contributions to a statewide effort to increase the number of Michiganders who earn college degrees or other postsecondary educational credentials.

MCAN singled them out as leaders in the college-access field as well as valuable partners in its effort to increase the number of Michigan students enrolling in, persisting through and completing postsecondary educational credentials. Organization officials say 38.4 percent of the state's residents have such credentials, and MCAN aims to increase the proportion to 60 percent by the year 2025.

WMU's efforts toward achieving that goal earned it the Steward Award: Creating College Access Talent. Recipients of the honor have "dramatically contributed to increasing the skills, talent and knowledge of college-access professionals in Michigan." Accepting the award on behalf of the University were Dr. Mary L. Anderson, associate professor of counselor education and counseling psychology, and Dr. Ming Li, dean of the College of Education and Human Development.

MCAN selected WMU for the Steward Award based on three primary initiatives.

All of the recipients of the 2015 College Access Impact Awards were cited for having a tremendous impact on increasing college readiness, participation and completion in Michigan, particularly among low-income students, first-generation college students and students of color.

WMU's award draws attention to the University's extensive efforts related to college access, as well as the number of administrators and other employees who are involved in them.

Education college Dean Li, for instance, serves with Anderson on MCAN's Michigan College and Career Readiness School Counseling Task Force and also has been active at the national level. His more recent activities include being a member of the Michigan delegation that took part in the invitation-only White House convening event on strengthening school counselors and college advising that was held Nov. 17-19, 2014, at San Diego State University.

For more information about the College Access Impact Awards or increasing college attainment in Michigan, visit MCAN's website at micollegeaccess.org.