Some 3,000 medievalists from dozens of nations to gather at WMU 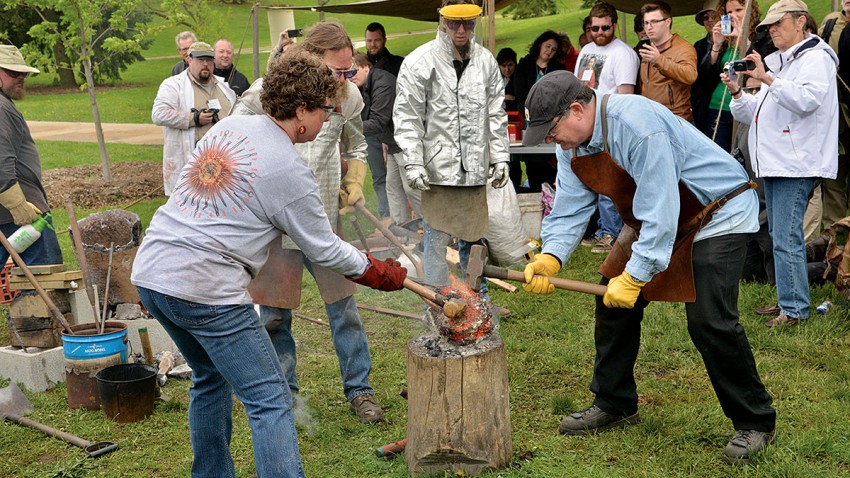 Onlookers observe an iron-smelting demonstration at a previous congress.

KALAMAZOO—Some 3,000 of the world's leading authorities on medieval culture will converge on the Western Michigan University campus Thursday through Sunday, May 14-17, to discuss all aspects of the period that spanned more than a millennium.

The International Congress on Medieval Studies, now celebrating its 50th assembly, is the world's largest annual gathering of those interested in things medieval. The event focuses on the presentation of academic papers but also includes panel discussions, workshops, demonstrations and performances.

Organized by WMU's pioneering Medieval Institute, the event attracts professional academics, independent scholars, students, writers, performers, medieval enthusiasts and others from around the globe. They fill area hotels as well as WMU's Goldsworth Valley complex of six residence halls, where the congress is centered.

An outdoor series of hands-on history demonstrations will be staged at 3:30 p.m. Saturday at the Goldsworth Valley Pond by the Dark Ages Recreation Company. Personnel from the organization will demonstrate three Viking-age technologies: the Ribe furnace used to make glass beads; the Aristotle furnace, an iron-into-steel re-melting furnace; and textile production from sheep to shoulders. Attendees may circulate among the demonstrations and discuss the technologies with the presenters.

In honor of the this year's 50th gathering, the Medieval Institute has partnered with six scholarly societies to mount a panel discussion and six roundtable discussions that revisit the topics addressed at WMU's first medieval studies conference. The series examines medieval contributions to knowledge theory as well as art, theatre, music and other aspects of "Medieval Originality," which was the theme of the inaugural gathering. 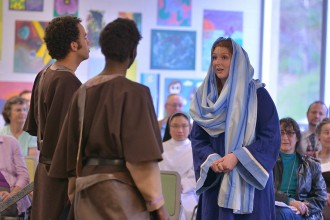 A contemporary staging of the French play, "The Mystery of Saint Veronica," took place in 2014.

The Medieval Institute is collaborating with the Michigan Festival of Sacred Music to present a concert of modern chamber music inspired by the music of the medieval German mystic Hildegard of Bingen. The 45-minute concert, set for 7 p.m. Saturday in 1045 Fetzer Center, will be performed by musicians drawn from the Kalamazoo and Chicago areas, and will be immediately followed by a discussion with the composers, performers and other invited panelists.

Among the congress sessions will be semi-staged and readers' theater performances of Malory's "Morte Darthur," Shakespeare's "Much Ado about Nothing," Tolkien's "Beowulf," and plays from the York mystery cycle.

The 2015 congress will include more than 550 sessions covering an enormous number of topics, such as animals and monsters, Arthurian literature, Shakespeare and sex, incarceration, medicine, monasticism, and warfare. Sessions also will commemorate anniversaries of the great European famine of 1315 and the English victory in 1415 at the Battle of Agincourt during the Hundred Years' War.

Special plenary lectures are scheduled for 8:30 a.m. Friday and Saturday, May 15-16, in the Bernhard Center's East Ballroom. First up will be an apt discussion for the modern age, rocked as it is by competing moral and practical considerations associated with everything from "the 99 percent," abortion and enhanced interrogation techniques to police use of deadly force, terrorism and desperate refugees.

Dr. Cary J. Nederman, professor of political science at Texas A&M University, will speak on "Modern Toleration through a Medieval Lens: A 'Judgmental' View." Nederman will examine how the early history of toleration can shed light on the limitations of classic liberalism as well as suggest alternative ways of building tolerant social and political institutions.

Then on Saturday, Dr. Richard Utz, professor and director of literature, media and communication at the Georgia Institute of Technology, will give a talk that returns to the topic of one of the keynote addresses during WMU's first medieval studies conference, "The Notion of the Middle Ages: Our Middle Ages, Ourselves." Utz will discuss the increasing subjectivity that informs people's views of the period. 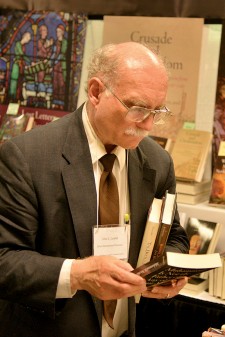 An attendee peruses books in the exhibits hall.

This year's Medieval Congress also includes workshops on reading Old French aloud and on identifying loose leaves from medieval music manuscripts, as well as a poster session that will focus on medieval-themed video games. Plus, there will be more than 100 business meetings and receptions hosted by learned societies, publishers, and academic programs.

The exhibits hall is a favorite venue for both visiting medievalists and Kalamazoo residents, who have the opportunity to attend the congress at no cost. It will feature the wares of more than 70 vendors, including publishers, used and rare book dealers, and purveyors of various medieval sundries.

The Medieval Congress began as a biennial conference in 1962. Sponsored by WMU's Medieval Institute, also established in 1962, it grew to become an annual event in 1970 and celebrated its 50th anniversary in 2012.

The institute's founding director, Dr. John Sommerfeldt, describes the origin of the conference in his desire to create a venue "where a bright young scholar could be heard." Sommerfeldt's egalitarian approach, considered radical at the time, has been central to the event's continuing success.

"Kalamazoo has been and continues to be a place where junior and senior scholars alike can gather to exchange ideas, create social and professional bonds and, just as important, have fun," says James M. Murray, director of the Medieval Institute.

The Medieval Institute is a center for instruction and research in the history and culture of the Middle Ages and ranks among the top 10 North American institutes, centers and programs that focus on medieval studies. Its pioneering function was to introduce the first Master of Arts in medieval studies offered at a state-supported university in the United States.

Today, WMU remains one of the few public colleges and universities in the nation with an interdisciplinary graduate program in medieval studies. In addition, the Medieval Institute is known internationally for its academic programs, Medieval Congress, notable research activities and longstanding scholarly publications program.

For more information about the 2015 International Congress on Medieval Studies, including on-site registration details, visit wmich.edu/medieval/congress or contact the Medieval Institute at medieval-institute@wmich.edu or (269) 387-8745.