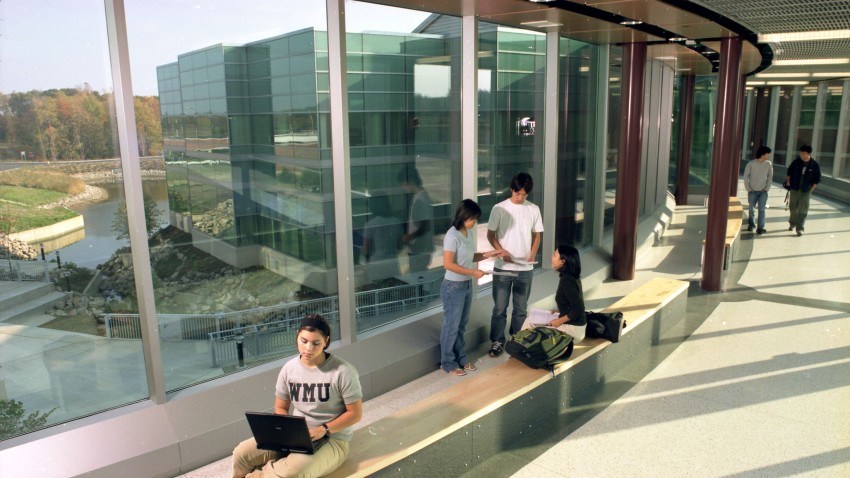 The engineering building has become an area landmark.

Elson S. Floyd Hall will be the new name for the massive College of Engineering and Applied Sciences facility that was begun during Floyd's presidency and serves as the anchor for the successful Business Technology and Research Park he envisioned. The naming will be effective after the University confers with Carmento Floyd, former WMU first lady and President Floyd's surviving spouse.

Floyd was president of WMU from 1998 to early 2003. He went on to serve as president of the University of Missouri and then Washington State University. He died June 20, just two weeks after announcing he would take a medical leave from WSU to focus on his battle with cancer. He was 59.

'A new standard in higher education'

"President Floyd's service relative to our College of Engineering and Applied Sciences and our Business Technology and Research Park was exceptional," said Board Chair James Hettinger in introducing the naming recommendation. "These are really landmarks among his contributions to this university."

Floyd's first six months at WMU were focused on determining a site that could both consolidate all of WMU's engineering programs in one place and serve as a site that could attract a development of private firms interested in becoming partners with a research university. In January 1999, he announced that a 265-acre parcel of University-owned land known as the Lee Baker Farm would become the home to what became a $99 million engineering complex and the surrounding BTR Park.

The 343,000- square-foot engineering building was dedicated and opened for classes in September 2003. It features 600-foot-long wings radiating from a glass hub and includes seven computer teaching laboratories, 75 research and teaching laboratories and a number of flexible classroom, lecture, study and research spaces that can be tailored to student and faculty needs. The highly visible building and the 120-foot lighted "Icon" near its main entrance have become landmarks in the region.

By the time Floyd left WMU, five private companies had located in the surrounding BTR Park, signaling the outcome he predicted. Today, the park is full and plans are underway for expansion. Reflecting on his WMU tenure as he left WMU, Floyd pointed to the engineering facility and the surrounding park as accomplishments in which he took particular pride.

"I'm proud to have enjoyed the confidence of the community and the faculty and staff here, but also for the opportunity to establish some best practices in higher education," Floyd said in 2003. "The College of Engineering and the Business Technology and Research Park are good examples of that...I think we have set a new standard in higher education and I am very proud of that."