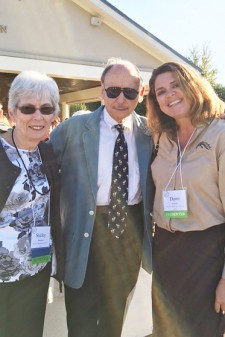 KALAMAZOO, Mich.—The Bernard Osher Foundation has awarded the Osher Lifelong Learning Institute at Western Michigan University a $1 million gift to set up an endowment in support of the communitywide effort that offers courses and trips to hundreds of area residents annually.

WMU President John M. Dunn announced the award Nov. 17 at the annual membership meeting of the OLLI at WMU. In addition to the $1 million to endow support for WMU's OLLI, the Osher Foundation awarded the University a $50,000 bridge grant, which represents the anticipated amount of interest the endowment will generate in future years.

"We're very proud of our connection with the Osher Foundation and pleased to play a role in the impressive work the foundation has supported over the years," Dunn says. "We accept this extraordinarily generous gift with a renewed commitment to promote and support lifelong learning for all."

WMU has been the home of an Osher Lifelong Learning Institute and part of the foundation's famed national network of similar entities since April 2014. The San Francisco-based foundation made an operating grant of $100,000 to WMU when the University's Lifelong Learning Academy was renamed OLLI at WMU. The foundation noted at the time it would consider providing a permanent support gift of $1 million to WMU once the WMU OLLI demonstrated success and the potential for sustainability.

Shirley Swanson has served as director of OLLI at WMU since 2014. Her responsibilities include tracking the participation of volunteers and coordination of course and trip offerings.

"In addition to the work of volunteers and staff," Swanson says, "community collaboration with OLLI at WMU have been instrumental to our growth and success."

Founded in 2011, the lifelong learning organization that became the Osher Lifelong Learning Institute at WMU is focused on offering high quality, noncredit programs for mature adults in the greater Southwest Michigan community who have a passion for learning. The volunteer organization, with oversight from WMU's Extended University Programs, works with members of the community as well as WMU emeriti, faculty and staff to offer courses and trips year-round. More than 900 area citizens participate in those offerings annually.

About the Osher Foundation

The Osher Foundation was founded in 1977 by Bernard Osher, a respected financial-sector businessman, community leader and philanthropist. The foundation's goal is to improve quality of life through support for higher education and the arts. The lifelong learning programs it supports can be found in all 50 states and the District of Columbia. The foundation also supports a National Resource Center for the Osher Lifelong Learning Institutes, which is located at Northwestern University.