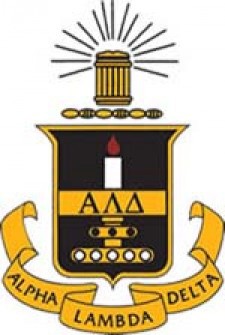 The honor society one of just a few nationally to receive the award in consecutive years of eligibility.

KALAMAZOO, Mich.—Western Michigan University's chapter of the Alpha Lambda Delta national honor society has received a national award for its activities over the past year and has had three first-year students recognized with national scholarships.

The WMU chapter was one of nine in the country to receive a prestigious Order of the Torch Award for the 2014-15 academic year in recognition of its continued excellence in programming, communications, campus visibility and overall presentation of the chapter's application. Besides WMU, other chapters honored included California University of Pennsylvania, Hood College, Morningside College, Otterbein University, University of New Haven, University of Oklahoma, Indiana University-Purdue University Indianapolis and University of Texas-Pan American.

WMU's successful chapter was led by Cole Villalobos, president, and advised by Anthony Helms, Lee Honors College director of academic advising. In October 2015, a representative from the WMU chapter was part of a panel presentation at the National Leadership Workshop in Orlando, Florida.

WMU is one of just three schools to win the Order of the Torch in consecutive/eligible four-year increments since 2003. In terms of the total chapters of ALD, WMU rates in the top 1 percent in this category.

In addition, students Madelyn Aittama, Julia Sant and Nicole Thompson are recipients of Jo Anne J. Trow Scholarships from the national ALD organization. Aittama of Milford and Sant of Avon Lake, Ohio, will receive $1,000; and Thompson of Redford was awarded $3,000.

The organization awards 36 Trow scholarships to outstanding students from across the country each year. Selection is based on maintaining a 3.5 grade point average; academic records; participation in Alpha Lambda Delta activities, campus and community service activities; and the applicant’s statement.

The Jo Anne J. Trow Scholarship was started in 1988, in honor of a past national president of Alpha Lambda Delta.  Jo Anne J. Trow is the former vice president for student services at Oregon State University. This award was originally established to give chapters of ALD an annual opportunity to reward an outstanding sophomore member with a small stipend.  The scholarships currently offer five $6,000 awards, five $3,000 awards, five $2,000 awards and 20 $1,000 awards.

Alpha Lambda Delta is a national honor society that recognizes students' academic success during their first year at a college or university. Founded in 1924, it has over a million life-time members and is present on over 275 campuses nationwide. Its mission is to "encourage superior academic achievement, to promote intelligent living and a continued high standard of learning, and to assist students in recognizing and developing meaningful goals for their unique roles in society."

For more information about WMU's chapter of ALD, contact Anthony Helms at anthony.p.helms@wmich.edu or (269) 387-3233.