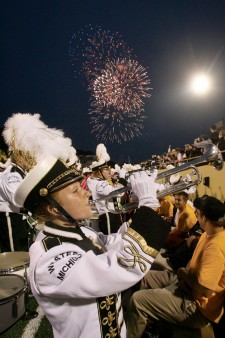 KALAMAZOO, Mich.—Western Michigan University's Bronco Marching Band will make a late-semester trip to Detroit this week to entertain more than 70,000 fans during halftime when the Detroit Lions take on the Green Bay Packers.

The highly regarded WMU band was invited by the Lions administration to play at the nationally televised NFL matchup at Ford Field Thursday, Dec. 3. After a six-to-seven minute performance on the field at halftime, the Lions will provide a large, seventh-floor viewing area for the band to eat and enjoy the second half of the game.

About the Bronco Marching Band

Known as "The Sound of Western," the celebrated Bronco Marching Band is one of the nation’s premiere college marching bands. At 295 members strong, the band is under the direction of Dr. David W. Montgomery and is comprised of students from virtually every academic discipline at the University. In addition to the halftime shows for the Bronco football fans at home, the Bronco Marching Band supports the team on select road trips, and regularly performs in exhibitions at area high schools and in parades. Its annual "Season in Review" concert at WMU's Miller Auditorium is a highly anticipated event.

Montgomery says for the the Ford Field performance the band will reprise a show titled "Sing-Along Favorites" that includes "Don't Stop Believin'" by Journey, a medley of "I Will Survive," made famous by Gloria Gaynor and the hit song "Uptown Funk" by Bruno Mars. This show was originally performed Oct. 24 at WMU's homecoming football game versus Miami University.