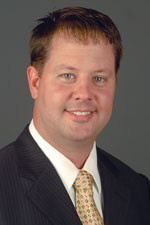 KALAMAZOO, Mich.—During its Dec. 8 meeting, the Western Michigan University Board of Trustees named Dr. Kahler B. Schuemann to serve as secretary to the board, replacing Betty A. Kocher, whose is stepping down from the position after more than three decades of support for the governing board.

Schuemann, whose new role is effective Jan. 1, has been serving since 2008 as assistant to WMU President John M. Dunn. Prior to that he held a similar position for two years as a graduate student assistant in the Office of the President.

Schuemann replaces Kocher who has served as board secretary since 1993 and served for nine years before that as assistant to the board secretary. She will retire in June after more than 42 years of service to WMU.