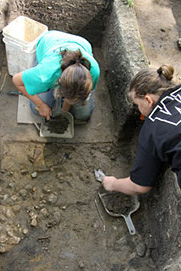 Archaeologists work on excavation at the Fort St. Joseph site.

KALAMAZOO, Mich.—Two Western Michigan University graduate students are sharing a $1,000 scholarship from the Register of Professional Archaeologists to continue their participation in the University's Fort St. Joseph Archaeological Project.

Amelia Harp of Marietta, Georgia, and Erika Loveland of Adrian received $500 each to participate in the project that provides strong hands-on learning components in both the field and laboratory and information on the cultural history of the site as well as that of the surrounding region.

The project focuses on uncovering the physical remains of one of the most important colonial-era outposts in the western Great Lakes. Project work at the site in Niles also teaches students how to communicate their technical findings through written journals and blogs and to interact with the public through open houses, public days or other outreach programs. It includes educational components designed to teach students about archaeological ethics and their responsibility to the various constituencies that they will serve in their careers.

Harp is a nondegree graduate student studying anthropology at WMU, and she is also pursuing her master’s degree in anthropology at Georgia State University. She received her bachelor’s degree in anthropology from Kennesaw State University, and completed an internship with the Pokagon Band of Potawatomi Department of Language and Culture. Her research interests include historical archaeology, public archaeology, and Native American studies with particular focus on the Great Lakes region. She is currently studying architecture and critically analyzing the relationship between academia and other various stakeholders, including Native American tribes, in the Fort St. Joseph Archaeological Project as part of her thesis work. She has participated in previous archaeological studies at Fort St. Joseph, the Dabbs site in Georgia’s Bartow County, and Fort Daniel in Gwinett County. She has also aided in analyzing historical artifacts that were uncovered during the 1970s in archaeological excavations associated with the MARTA subway system in Atlanta.

Loveland is a graduate student in the Department of Anthropology at WMU. She earned her bachelor’s degree in anthropology from the University of Michigan and completed her archaeological field school at Thomas Jefferson’s Poplar Forest. Her research interests include historical archaeology, public archaeology, colonialism, trade and regional analysis. She is currently examining the architectural components of Fort St. Joseph, a French mission-garrison-trading post complex. She has participated in research projects for the prehistoric Garden Creek Site in North Carolina and the Undocumented Migration Project.

The Fort St. Joseph mission, garrison and trading post complex was occupied from 1691 to 1781 along the St. Joseph River in what is now the city of Niles. Built by the French, the fort was at times during its 90-year history, controlled by the British and the Spanish. Since 1998, WMU faculty researchers and students have been working to identify, investigate and interpret the physical remains of the fort.

About the Register of Professional Archaeologists

The Register of Professional Archaeologists is a listing of archaeologists who have agreed to abide by an explicit code of conduct and standards of research performance, who hold a graduate degree in archaeology, anthropology, art history, classics, history, or another germane discipline and who have completed a thesis or dissertation or its equivalent that addresses a substantive archaeological research question.