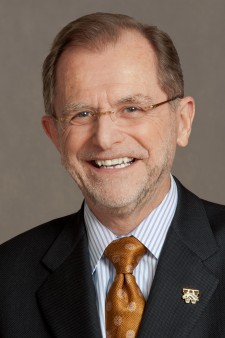 KALAMAZOO, Mich.—During a special conference call meeting of the Western Michigan University Board of Trustees Dec. 18, WMU President John M. Dunn's salary was increased, triggering a major gift by Dunn and a boost in scholarship funds for students.

Praising Dunn's accomplishments and performance, trustees awarded Dunn a 2 percent salary increase consistent with the percentage awarded to nonbargaining University employees early this fiscal year. The increase, which was passed by a roll call vote of six to one, is retroactive to July 1 and boosts Dunn's base salary from $390,431 to $398,240.

Dunn has served as the University's eighth president since July 2007. His practice since the start of his presidency has been with each salary increase to donate back to WMU the cumulative amount of his pay increases since his 2007 starting salary of $345,000. That pledge means this year's gift from Dunn and his wife, Linda, totals more than $53,000. They have designated the funds to be used for student scholarships.

"Linda and I consider ourselves fortunate to be a part of this learning community that has always focused so strongly on student success," Dunn says. "It is a privilege to be able to give back and provide support so that our students will one day have the same kind of opportunities."

Prior to the Dec. 18 action, the most recent adjustment to Dunn' s compensation was approved last year and effective on July 1, 2014. At that time, the board extended his employment contract to June 30, 2017. The contract also provided a provision that the president's salary would be reviewed at least annually and adjusted as determined by the board.