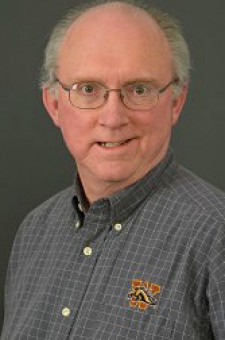 A Monday, Dec. 21, memorial service is slated for Dr. Steven Cartwright, monographic acquisitions assistant with University Libraries, who died Dec. 17 after a battle against cancer. He was 58.

Cartwright was named to the position he held for nearly 18 years in 1999 after a series of graduate assistantships at WMU and a stint as a bookseller. In addition to his role at Waldo Library, he taught world and medieval history at WMU and was one of the founding officers of the Part-time Instructors Organization, serving for a period as PIO president.

Cartwright earned a bachelor's degree in history from the University of Michigan in 1979. He then served as a U.S. Army officer until 1982. After completing his commission, he went to the United Theological Seminary in Dayton, Ohio, where he earned a Master of Divinity degree. He was a United Methodist pastor for four years and entered graduate school at Central Michigan University during that time.

Visitation is scheduled for 4 to 7 p.m. Sunday, Dec. 20, at Betzler’s Life Story Funeral Home, 6080 Stadium Drive in Kalamazoo. The memorial service will be Monday at 11 a.m. at the Second Reformed Church, 2323 Stadium Drive.