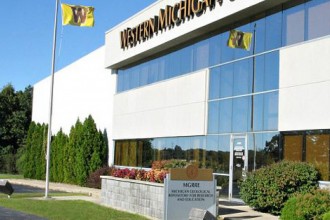 The state money will be used to immediately prioritize state needs, begin comprehensive assessment and mapping, and develop collaborations with industry to assess water, aggregate, gas and oil, and subsurface storage capacity. Such assets are critical to helping Michigan rebuild its infrastructure and maintaining a healthy environment.

"Our natural resources are all geologically based," notes John Yellich, director of the Michigan Geological Survey, which was formally moved to WMU by legislative action five years ago. "These resources are so important to us we can't afford not to use science to protect them and make decisions about how they can be developed and used."

University officials had praise for both the original decision to locate the survey at WMU and the new decision to begin the process of funding the survey in a way that allows it to take full advantage of its potential as both an environmental protection and economic development tool. Matching federal funds, for instance, are being left on the table because the survey does not have the ability to apply for them.

"We were delighted to offer the survey a home five years ago, and our geoscientists have worked hard to leverage the new partnership in a way that has helped manage and protect our natural resources," says WMU President John M. Dunn. "But without the ability to take full advantage of external opportunities, the geological survey can not reach its potential. We're grateful that legislators, led by District 61 Rep. Brandt Iden, made a wise decision that will allow the survey to make a bigger difference in our state's economy. Reps. Al Pscholka and Aric Nesbitt also deserve our thanks."

With only 10 percent of the state mapped to date, Michigan is at an economic disadvantage and has fallen behind neighboring states, says survey director Yellich. To date, Michigan has mapped only about 10 percent of the state's subsurface—much less than comparable states that have invested enough money to take advantage of opportunities to use federal matching funds.

Federal matching funds for mapping have been available for the past 24 years, but Michigan has used that opportunity at a much lower rate than other midwest states. Illinois, for instance, has used more than $4.7 million in federal matching funds to map 30 percent of its priority areas, while Michigan has used only $1.6 million in federal funds to map 10 percent of its needed areas over the same period.

The survey moved to WMU in 2011 and immediately started to use the Department of Geosciences extensive expertise, research capabilities and geologic resources. Those resources include the Michigan Geological Repository for Research and Education, which is home to an immense collection of core samples taken when water, gas and oil wells have been drilled across the state.

The resources have been instrumental in recent years in enhancing research and educating even more geoscience professionals and in allowing the survey and WMU to:

In addition, the resources of the survey and WMU geoscientists have led to:

"We don't need to map the whole state," Yellich says, "but we need to prioritize areas of importance and make smart decisions about important areas such as water quality and the need to discover aggregate deposits that will help us rebuild infrastructure."