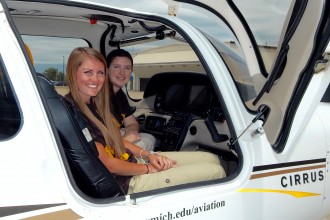 From left: Satkowiak and Bates

Elizabeth Bates, an April 2016 WMU graduate from Plymouth, Massachusetts, and Shelby Satkowiak, a WMU senior from Mio, Michigan, are in Prescott, Arizona, preparing for the Tuesday start of the race that will conclude four days and more than 2,700 miles later in Daytona Beach, Florida.

Bates will serve as pilot and Satkowiak will be co-pilot as the flight team, sponsored by the WMU College of Aviation, competes against both veteran women pilots and other collegiate teams. The 51 teams competing include 17 teams from 14 colleges and universities. The race challenge pilots to race against their own best speed in the airplane of their choice.

The renowned women's aviation event dates back to the days of Amelia Earhart and each year features women pilots from across the nation flying fixed-wing aircraft using visual flight rules. Bates and Satkowiak will pilot one of the College of Aviation's Cirrus SR-20 aircraft as they compete against other teams flying small aircraft to reach Daytona Beach with the fastest time.

The 2,716-mile race begins and ends at Embry Riddle Aeronautical University campuses in Prescott and Daytona Beach and follows a path over mountainous terrain, through America's heartland and into the the deep south. Official race checkpoints along the way include Albuquerque, New Mexico; Midland and Waco, Texas; Arkadelphia, Arkansas; Warrensburg, Missouri; Champaign-Urbana, Illinois; Murfreesboro, Tennessee; and Americus, Georgia.

This is the first year of Air Race Classic competition for both members of the WMU team, although WMU has sponsored teams in 11 previous races since 2000.

Bates earned a bachelor's degree in aviation flight science in 2016. A longtime member of WMU's celebrated Sky Broncos competitive flight team, Bates says her experience on that team will help in this race. She is particularly looking to the mountainous terrain as a challenge, but notes she earned her flight instructor certificate in Colorado, so she has some experience on that front. Bates is a 2012 graduate of Plymouth South High School.

"The biggest challenge will be the changing terrain," Bates says. "We'll be flying from the mountains to the beach over four long days, and some of the southern areas of Texas are known for pop-up thunderstorms we'll have to watch out for."

For Satkowiak, the changing terrain will also be a challenge, since her flight experience as an aviation flight science major at WMU has all been in Michigan. She is, however, extraordinarily aware of the weather challenges they may face, since she served last year on the support team for the 2015 WMU team, tracking weather conditions from the Battle Creek campus to provide the team with the latest updates.

"I'm excited by the opportunity to be part of this year's team and get to meet new people while competing against experienced pilots," says. "For me, this will be the first time I fly not for training, but in a competitive situation."

Satkowiak is a 2013 graduate of Mio AuSable High School.

The Air Race Classic traces its roots to the 1929 Women's Air Derby, in which Amelia Earhart and 19 other daring female pilots raced from Santa Monica, California, to Cleveland, Ohio. That contest, known then as the Powder Puff Derby, marked the beginning of women's air racing in the United States.

Since many types of planes are used to compete in the race, each plane is given a handicap in ground speed, and the goal is to have the actual ground speed be as far over the handicap speed as possible. The pilots have the leeway to play the elements by holding out and timing their travel for better weather or wind conditions, for instance. The objective is to fly the "perfect" cross-country course.

A map of the race route and additional information can be found at airraceclassic.org. Bates and Satkowiak expect to file regular updates on their team Facebook account at facebook.com/wmuairraceclassicteam. A video also is available at youtube.com/watch?v=Xs1qm4yOEQk. Once the race starts, those following the event will be able to trace the WMU team's progress through a link—airraceclassic.org/follow-the-race.htm—that will show exactly where on the course WMU's team, No. 50, is positioned.