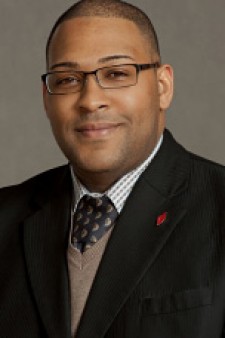 KALAMAZOO, Mich.—An alumnus with an extensive track record in building the leadership and collaboration capacity of area organizations has been appointed to lead Western Michigan University's fundraising and alumni relations efforts.

Timothy R. Terrentine Sr., who currently serves as executive vice president of Southwest Michigan First, will become WMU's vice president for development and alumni relations, effective Aug. 22. His appointment was made pending approval by the University's board of trustees. He will replace James Thomas, who left WMU earlier this summer to take charge of development operations at Virginia's Colonial Williamsburg.

"Tim Terrentine is an executive with enormous talent for making connections and matching talented people with the resources they need," says WMU President John M. Dunn. "Those talents, combined with his strong Bronco ties and his extensive background in area professional, civic and charitable organizations, make him a wonderful choice for this position."

Terrentine has been at Southwest Michigan First since 2010, serving that economic development agency with his focus in the areas of leadership development, business retention and expansion and regional collaboration. He has been the spark behind such leadership advocacy programs as Catalyst University, Leadership Kalamazoo and the Wake Up Breakfast Series. In 2012, when the 100-year-old Kalamazoo Regional Chamber of Commerce became part of SWMF, Terrentine became president of the chamber and led a renewal and reorganization of the chamber's services for business.

In addition, he has served since 2013 as managing director and consultant for C2 Consulting, a wholly owned subsidiary of SWMF devoted to serving a diverse portfolio of business clients in such areas as strategic planning, employee engagement, succession planning and communication.

"This is something of a homecoming for me," Terrentine says of the new role at his alma mater. "It's an opportunity to grow an institution that has the power to change our culture. Education is freedom. And this is a chance to bring so much to the region and the nation."

Terrentine says he's grateful for the personal growth his tenure at Southwest Michigan First allowed, noting it was a chance to learn and grow "20 years' worth in six years time." The experience there, he says, helped him prepare for the WMU opportunity.

Prior to joining the SWMF organization, Terrentine served as executive director of the Douglass Community Association from 2006 to 2010. He also held previous positions as a teaching assistant with WMU and as a school director for Proud to Be Me, one of the signature programs of Derek Jeter's Turn 2 Foundation.

Terrentine earned a bachelor's degree from WMU in 2004 and a master's degree from WMU's School of Communication in 2006. He also holds a certificate in 21st Century Leadership from Harvard University, earned in 2012, and has been a performance coach with the Gallup Corp. since 2014.

An active participant in a number of WMU efforts, Terrentine is a member of the Board of Directors of the WMU Homer Stryker M.D. School of Medicine. He also has been a frequent speaker on campus and, in 2008, he was inducted into the WMU School of Communication Alumni Academy in recognition of his professional and civic achievements.