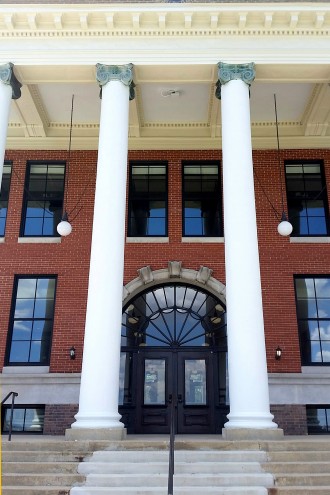 KALAMAZOO, Mich.—Western Michigan University's Heritage Hall renovation has been singled out as a finalist for a 2016 Governor's Energy Excellence Award.

The 1905 facility, which is WMU's birthplace, underwent a 16-month renovation, reopening in October 2015.  The work took the original building from being the least energy efficient building on campus to one of the most efficient and environmentally sophisticated buildings in Southwest Michigan.

The WMU effort is one of three energy projects around the state up for the award in the "Best Projects-Public" category. The other two finalists are projects from the East Jackson and Parchment public school districts. Honorable mention in the category went to Michigan State University. Finalists for this and seven other categories were announced by Gov. Rick Snyder's office this week. Winners will be revealed during a mid-August award ceremony in Lansing.

"Energy efficiency doesn't mean doing less," said Snyder in a news release announcing the finalists. "It means doing as much or more but using less energy to get it done. Energy efficiency is the best example of a no-regrets policy Michigan can have. Reliable and affordable energy helps fuel Michigan's economy. Continuing to reduce energy waste is one of the main ways we can keep energy prices affordable in Michigan."

Before its renovation, the 53,000-square-foot Heritage Hall had no insulation, no central cooling and utilized campus steam for heating. A series of chimneys throughout the building functioned only to permit fresh air to circulate in the building. A significant part of the renovation included asbestos and lead abatement.

Today, the facility is heated and cooled by 56 geothermal wells using 50 percent less energy than more traditionally heated and cooled buildings. In addition, 100 percent of ventilation air goes through a heat-recovery unit. Energy efficient LED lighting was also installed leading to a 60 percent reduction in energy used for lighting.

The Christman Co. was the construction firm that oversaw the transformation. The project's architectural design and engineering was done by Tower Pinkster. Helping to ensure the project retained the historic character of the building was historic preservation expert Gene Hopkins from Hopkins Burns Design Studio of Ann Arbor. The entire effort was done to meet LEED-Platinum certification standards.