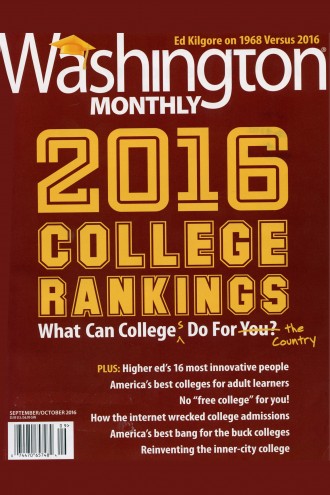 KALAMAZOO, Mich.—A college guide unveiled Aug. 29 by the government and politics publication Washington Monthly ranks Western Michigan University among the nation's top universities for producing graduates and research that will make a difference for the nation.

In its 11th annual assessment of nearly 750 of the nation's colleges and universities, the magazine ranked WMU at No. 64 among national universities—up 28 places from its spot in the 2015 Washington Monthly ranking. Published annually since 2006, the Washington Monthly college rankings provide a contrast to those published by such publications as U.S. News & World Report and Forbes. The methodology is designed to "ask not what colleges can do for you, but what colleges are doing for the country."

Rather than ranking institutions on such input measures as wealth, fame and exclusivity, schools are rated based on their contribution to the public good in three broad categories:

In addition to the three broad measurement categories Washington Monthly has been using since the start of its ranking initiative, this year, additional measurements that have only recently become available were added to the mix. They include detail on student earnings 10 years after enrolling, how likely it is that they are able to pay down student loans and the percentage of first-generation students at each college.

"We incorporate all of this new information, and more, into this year's rankings, marking the single biggest change to our methodology to date," says Kevin Carey, director of the Education Policy Program at New America and guest editor of Washington Monthly's 2016 College Guide issue.

WMU has repeatedly appeared on the magazine's overall list of top-100 national universities. This year, its placement in several of the individual assessments that are part of the overall ranking were exceptionally high. The University's performance in the student earnings ranking was No. 26 nationally, while its community service and loan repayment performance ranks both came in at No. 33.

This year, the magazine also debuted the nation's first-ever ranking of the Best Colleges for Adult Learners, in which WMU ranked No. 93.

Washington Monthly is a bimonthly nonprofit magazine that focuses on U.S. politics and government and is based in Washington D.C. It was founded in 1969. The magazine's complete 2016 college rankings can be found at washingtonmonthly.com/college_guide.