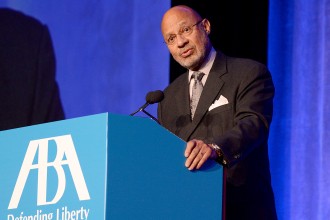 Gathering in San Francisco for its annual meeting in August, the ABA honored Archer with the 2016 ABA Medal for his lifetime of achievement. Given for outstanding service to the law and legal profession, the medal is regarded as the association's most prestigious award. Previous recipients include U.S. Supreme Court justices Oliver Wendell Holmes, Felix Frankfurter, Thurgood Marshall, William J. Brennan Jr. and Sandra Day O'Connor.

Archer, a 1965 alumnus of WMU, has been a Michigan Supreme Court Justice, two-term mayor of Detroit, chairman of his firm and the first African-American president of the ABA. Introducing Archer during the award ceremony, ABA Immediate Past President Paulette Brown noted that Archer "exemplifies the ‘conspicuous service to the cause of American jurisprudence’ the ABA Medal recognizes.”

In accepting the award, Archer credited his parents for instilling in him a deep commitment to education and giving him the foundation he needed to succeed.

Archer was raised in Cassopolis and said "at a very early age I was taught I was going to college by parents who never set foot on a college campus."

Archer recounted the path that took him from WMU to a teaching career in Detroit, a law degree from the Detroit College of Law and ultimately national acclaim in the legal profession.

"The practice of law has been a calling," Archer told the ABA gathering. "Thanks to the ABA, it has given me and others a chance to participate in and be an advocate for what we believe are the right and proper things that will make America even stronger."

Archer has remained close to his alma mater during his career. He was appointed in 2005 by then-Michigan Gov. Jennifer Granholm to serve an eight-year term as a WMU trustee, and he was chair of the WMU Board of Trustees in 2011. A longtime member of the WMU Alumni Association, Archer was honored by that organization in 1982 as a recipient of the Distinguished Alumni Award.

He is chairman and CEO of the law firm Dennis W. Archer PLLC of Detroit and chairman emeritus of the firm Dickinson Wright PLLC, also in Detroit. Archer also has served on corporate boards for Johnson Controls Inc., Compuware Corp. and Masco Corp.

The ABA Medal recognizes exceptionally distinguished service by a lawyer or lawyers to the cause of American jurisprudence and is given only in years when the ABA Board of Governors determines a nominee has provided exceptional and distinguished service to the law and the legal profession. Archer expressed thanks in his remarks to those who nominated him and supported that nomination. They included three former Michigan governors, one chief justice of the Michigan Supreme Court, the current and 11 former presidents of the ABA, and "a 2016 U.S. presidential candidate."

A video of Archer's introduction by Brown and his acceptance remarks in San Francisco can be found at americanbar.org/news/abanews/aba-news-archives/2016/08/first_african-americ.html.