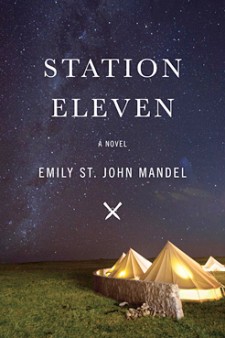 All of WMU's first-year students are required to read the book. Members of the campus and broader communities also are encouraged to read the work and attend related activities taking place this fall.

Events include a public presentation by "Station Eleven" author Emily St. John Mandel at 7 p.m. Wednesday, Oct. 19, in the Fetzer Center's Kirsch Auditorium. The talk will be followed by a question-and-answer session. Earlier in the day, Mandel will meet with students from WMU's Lee Honors College.

In addition, Dr. Elizabeth Bradburn, WMU associate professor of English, will discuss the book over two Wednesdays in a public, on-campus presentation titled "Imaginary Worlds and Real Insights." Discussions are set for 11:30 a.m. to 1 p.m. Sept. 28 and Oct. 5 in the Trimpe Building's Multicultural Center. Both discussions are open to the public, and a light lunch will be provided for those who register at lindsey.palar@wmich.edu. The discussion is part of the University's Real Talk Diversity Series.

For more information about the discussion or series, visit wmich.edu/diversity/events.

"Station Eleven" focuses on a troupe of Shakespearean actors and orchestral musicians who travel the shores of Michigan's Great Lakes 20 years after a devastating flu pandemic wipes out modern civilization. The troupe is dedicated to keeping the remnants of art and humanity alive, but encounters a violent prophet who threatens its existence. And as the story takes off, vividly depicting life before and after the pandemic, the strange twist of fate that connects them all is revealed.

Published by Alfred A. Knopf in 2014, "Station Eleven" has won numerous awards as well as been a New York Times and international best-seller. Reviewers here and abroad have praised it as a highly literary, postapocalyptic novel that crosses a variety of genres while taking a sweeping look at humanity.

"A novel that miraculously reads like equal parts page-turner and poem," Karen Valby of Entertainment Weekly wrote. "One of [Mandel's] great feats is that the story feels spun rather than plotted, with seamless shifts in time and characters."

Meanwhile, Mike Fischer of the Milwaukee Journal Sentinel noted that the book has several moving passages that bring life into focus for readers as well as those in the book.

"...Mandel's characters look back with similar longing toward the receding pre-plague world, remembering all the things they'd once taken for granted—from the Internet to eating an orange," Fischer wrote. "...It's not just the residents of Mandel's post-collapse world who need to forge stronger connections and live for more than mere survival. So do we all."

Emily St. John Mandel lives in New York City and is a staff writer for The Millions. She has written four novels, most recently "Station Eleven," which has been translated into 27 languages. A previous novel, "The Singer's Gun," was the 2014 winner of the Prix Mystere de la Critique in France. Her short fiction and essays have been anthologized in numerous collections, including Best American Mystery Stories 2013.

Copies of "Station Eleven" are available for checkout from WMU's Waldo Library and for purchase at Buster's Bookstore on campus in the Bernhard Center.

For more information, including interviews, reviews, journal articles and other resources related to the book and Mandel, visit libguides.wmich.edu/wmucommonread2016-17.

Questions about common read events should be directed to Dr. Toni Woolfork-Barnes, director of First-Year Experience, at toni.woolfork-barnes@wmich.edu or (269) 387-2301.