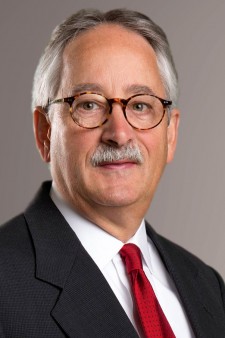 KALAMAZOO, Mich.—Lawrence P. Nolan, an alumnus of both Western Michigan University and the WMU Cooley Law School, was sworn in Sept. 22 as the 82nd president of the State Bar of Michigan, charged with leading the organization's 45,000 members.

In his new role, he will help improve the administration of justice, promote the legal profession and build public understanding of the legal system. He was sworn in at the SBM's annual meeting at Devos Place in Grand Rapids. He previously served on the SBM Board of Commissioners since 2006 as treasurer, secretary, vice president and president-elect.

Nolan, of Eaton Rapids, is the founder and president of Nolan, Thomsen & Villas, where he focuses his practice of law on personal injury, wrongful death, criminal, probate, domestic relations, estate planning and real estate law.

A 1971 WMU alumnus, Nolan earned his undergraduate degree in English with a minor in business administration. He went on to become a member in 1976 of the first graduating class of what was then the Thomas M. Cooley Law School.

Nolan has served as a member of WMU Cooley's Board of Directors since 1983 and currently holds the position of chair of that body. Nolan supports the law in a variety of other ways, as well, mentoring students and presenting on civility and professionalism to students during orientation. As chair of the Cooley board in 2013-14, he was instrumental in the development of the formal affiliation between WMU and Cooley that resulted in creation of the WMU Cooley Law School.

Nolan has remained close to WMU over the years and has made presentations on campus.