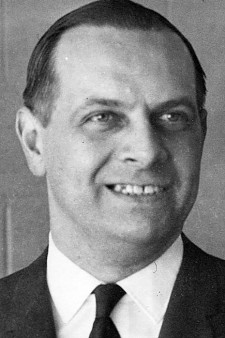 Olenchak joined the WMU faculty in 1966 and retired in 1984 as an assistant professor emeritus of education and professional development after more than 17 years of service to the University.

He initially was appointed to teach in the Department of Music and to direct vocal and instrumental music activities at WMU's campus school, a training school for students preparing to become teachers.

At the time, Olenchak was one of the few WMU administrators to also teach and conduct research. He studied such areas as program development, evaluation and teaching, and he wrote, co-wrote or edited nine books and pamphlets.

Many of his scholarly articles and research papers were published in professional journals, including the Journal of Teacher Education, The Instructor and the Michigan Association of Teacher Educators—MATE—News. He also composed music, produced one television film and served as an advisor for another TV film.

Olenchak was active in a host of regional, state and national professional organizations. He served MATE in a variety of ways, including as president and chairman of the executive board in 1982-83. He also was a longtime committee member for the national Association of Teacher Educators and Michigan Music Educators Association.

For more than 23 years, Olenchak worked with the Phi Delta Kappa honorary education fraternity. He served as president of the Michigan chapter at the University of Michigan in 1981-82. During that time, he initiated the Elderhostel program at U of M through Phi Delta Kappa, and served on its board of directors.

Additionally, he received the Distinguished Service Key from Phi Delta Kappa International for his leadership and service to education in the state of Michigan, as well as two teaching awards from WMU and two meritorious service awards from MATE.

Olenchak's career also included many years of employment outside of WMU in Michigan, Virginia, Maryland and South Carolina as a university professor or as a teacher at public and private schools.

Soon after retiring from WMU, he developed a teaching company for music called Music on the Move in Michigan. It supplied teachers and planned and taught general, vocal and instrumental music in private and parochial schools in the state.

The family obituary is available at kornegayandmoseley.com. A guestbook has been established at legacy.com for posting memorial messages.

Memorial gifts may be made in Olenchak's name to: