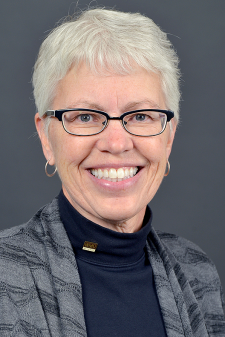 Margaret Jane Watson, a former Western Michigan University staff member, died Sept. 26 at Rose Arbor Hospice in Kalamazoo from complications due to cancer. She was 61.

Watson joined the WMU staff in 1981 and retired in 2015 after more than 33 years of service to the University. The Kalamazoo resident began her WMU career as a clerk in University Libraries, where she had worked while a student at WMU.

She became supervisor of the Media Laboratory, a student-centered multimedia lab in the Division of Academic Services, in 1983 and classroom technology consultant in the Office of Information Technology in 2004.

In her technology consultant role, Watson's primary responsibility was to make sure that dozens of WMU's sophisticated technology carts were functioning properly for professors and instructors across all of the West Campus.

She monitored the carts from her office throughout her work day and was at the ready to trouble-shoot problems by phone or rush to classrooms when necessary. Just a few years into the job, some 700 faculty members were already incorporating the technology carts into their teaching.

As added services, Watson developed the original instruction manuals for each cart and provided one-on-one training for teachers at their convenience in the specific rooms where they would be using the carts.

She established strong relationships with faculty members during her time at the University and was an active volunteer. Notably, she served for several years on the Presidential Spirit Committee and was on the team that started Finals Finish, a longstanding multiday event that helped students weather final exam week.

Watson was born in East Jordan, Michigan, and worked as a librarian for Oneida High School in New York from 1977 to 1979.

She earned an associate degree in media technology from Ferris State University in 1975, a bachelor's degree in learning resource management from FSU in 1977 and a master's degree in library science from WMU in 1981.

No formal service is being held, per Watson's wishes. The family obituary and a personalized webpage where messages may be left is available through Penzien Funeral Homes at penzienfh.com.

Memorial gifts may be made to: