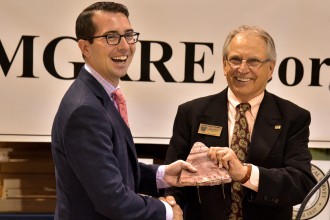 KALAMAZOO, Mich.—A $500,000 investment by the state of Michigan in the Michigan Geological Survey will be used to map the subsurface of Michigan in a way that will dramatically enhance economic development and ensure that vital natural resources are analyzed, protected and used wisely.

Area legislators and geoscientists gathered Sept. 29 on the Western Michigan University campus, which has been home to the state survey since 2011, to announce the funding that is part of the 2017 Michigan budget. They outlined the statewide geologic mapping that is vital to Michigan's future and announced one Kalamazoo-area initiative that will benefit from that mapping.

"This funding will allow us to leverage the skills and resources of our geoscientists and better analyze and protect vital state resources in a way that can make an enormous difference in our state's future," said WMU President John M. Dunn at the event. "We're grateful to our local legislators who championed this funding."

The state money will be used to prioritize Michigan's needs, begin comprehensive mapping and develop collaborations with industry to assess water, aggregate, gas and oil and subsurface storage capacity. The aim of the work is to help Michigan rebuild its infrastructure and maintain a healthy environment.

"The $500,000 appropriation awarded to Western Michigan University from the state budget will benefit our local community, our region and our state through the expansion of the Michigan Geological Survey," said state Rep. Brandt Iden, of Oshtemo, who played a key role in securing the funding. "I believe that this is an investment in Michigan’s future and an opportunity to obtain vital data on our state’s natural resources that will aid in the conservation of such viable assets and prioritize future planning for strategic developments to grow our economy safely, create jobs and ensure energy independence."

One example of an effort that will get the immediate attention of WMU geoscientists working through the survey is the mapping of the city of Portage's subsurface to define several bedrock valleys and coarse-grained aquifers that are capable of supporting high-capacity municipal wells. To date, the only information on these important water resources have come accidentally during single well drilling.

The four-month survey work in Portage will begin the systematic mapping of 55 square miles of subsurface, using data from 220 stations to produce maps that will both define the size and scope of the valleys and deliver the information needed to protect them.

"These bedrock valleys would be priority targets for future water supply wells for an expanding population," says John Yellich, director of the Michigan Geological Survey. "Without this mapping, the valleys cannot be adequately protected by zoning from potential contaminants from such land usage as storage facilities for fuel, agricultural chemicals and fertilizers, and industries that use toxic chemicals."

Yellich says the state funding will allow the survey to begin to take full advantage of its potential as both an environmental protection and economic development tool. In addition to water, the state's subsurface natural resources, include limestone, minerals, soils, sand, salt, oil, gas and ores. With only 10 percent of the state subsurface mapped to date, Michigan is at an economic disadvantage and has fallen behind neighboring states, he notes. Michigan has mapped far less than comparable states that have invested enough money to take advantage of opportunities to use federal matching funds.

Those federal matching funds for mapping have been available for the past 24 years, but Michigan has used that opportunity at a lower rate than other Midwest states. Ohio, for instance, has used nearly $3 million in federal matching funds to map 80 percent of its priority areas. A recent study shows the data and research that Ohio's Geological Survey produces has a minimum annual economic impact on that state of $575 million. In Kentucky, state officials say they've experienced a $25 to $38 benefit for every dollar spent on geologic mapping.

Since the state designated WMU as the home to the Michigan Geological Survey in 2011, the University's Department of Geosciences and its extensive research capabilities and geologic resources have been integral to the survey's work. Among those WMU resources are the Michigan Geological Repository for Research and Education, which is home to an immense collection of core samples taken when water, gas and oil wells have been drilled across the state. Those resources have played a major role in the protection of groundwater, development of oil and gas supplies, development of a long-term carbon sequestration program and rediscovery of a large potash deposit.