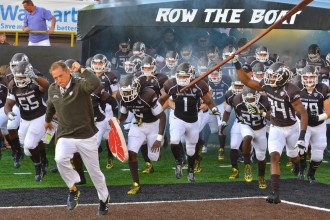 KALAMAZOO, Mich.—A 49-10 win against arch rival Central Michigan University and the chance to take home the rivalry's Cannon Trophy for the third straight time was just the start of two consecutive weekends of history-making news for the WMU Broncos.

Following the Oct. 1 win at Mt. Pleasant in the Battle for the Cannon, the Broncos were ranked in the USA Today Amway Coaches Poll for the first time in program history. Debuting at No. 25 in the poll, the Broncos were 5-0, with wins against two Big 10 teams—Northwestern and Illinois. It was also just the fourth time in Mid-American Conference history a school has beaten two Big 10 opponents in the same season.

The team extended its winning streak to 6-0 with an Oct. 8 homecoming win against Northern Illinois. That 45-30 victory set the stage for WMU to make its entry into the Associated Press Poll for the first time in WMU history. The Broncos' No. 24 spot in the AP Poll was announced Oct. 10. And the win against NIU pushed the Broncos into the No. 23 slot in the USA Today Amway Coaches Poll.

"No. 24 Western Michigan is 6-0 for the first time since 1941 and is in position to content for a spot in a New Year's Six bowl," said the AP in its narrative about the Oct. 10 rankings. "The Broncos have already beaten two Big Ten teams and have continued a steady rise since P.J. Fleck, the second-youngest head coach in the FBS at 35, took over in 2013 and went 1-11. WMU was 8-5 the past two seasons, reaching bowl games in consecutive seasons for the first time in school history.

The Broncos play next in an Oct. 15 matchup against the Akron Zips. Kickoff is at 3:30 p.m.