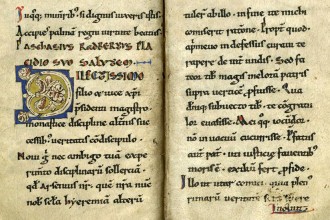 KALAMAZOO, Mich.—A rare 12th-century manuscript that is a copy of a work first produced some 300 years earlier is now at home in Western Michigan University's Special Collections and Rare Book Department, thanks to a grant from the New York City-based B.H. Breslauer Foundation.

Written in northern France between 831 and 833, the original text was the work of Paschasius Radbertus, a Benedictine abbot later made a saint by Pope Gregory VII. It is an instructional text about the Eucharist for Benedictine monks.

The manuscript's Latin title is "De Corpore et Sanguine Domini," which means "On the Body and Blood of the Lord." The influential writing was widely disseminated during the Middle Ages and was considered groundbreaking and controversial in its argument for the Eucharist transforming into the body and blood of Christ.

Purchased using both endowed funds for the rare book collection and a $70,000 grant from the Breslauer Foundation, the small 12th-century manuscript is expected to play a major role in graduate and undergraduate teaching and research at WMU. The University is home to an internationally known Medieval Institute as well as two renowned research centers—the Richard Rawlinson Center for Anglo-Saxon Studies and Manuscript Research and the Center for Cistercian and Monastic Studies.

The manuscript arrived on campus Oct. 20 and is now at home in WMU's Waldo Library, says Dr. Susan Steuer, head of the Special Collections and Rare Book Department. It will be exhibited only occasionally, she says, because of the toll exhibition can take on these artifacts.

"The manuscript will be used primarily for research and teaching," Steuer says, noting that library staff will digitize the work to extend access to the manuscript even more widely. "There are still things you need to see in their original physical form to fully understand. We're grateful to the Breslauer Foundation for helping us add this important piece to our collection and expanding our ability to serve the communities interested in this significant work."

Steuer says the new manuscript will become a pillar of the medieval manuscript collection, and it is of interest because it represents some typical features of manuscripts of its date, but also because it has a number of unusual characteristics, such as its small size—about 3 by 4.5 inches—and the author's citation of sources. The small size, Steuer says, reflects the fact it was meant as a tool for individual study, rather than the kind of group use that was the purpose of some larger medieval manuscripts.

Dr. Elizabeth Teviotdale, assistant director of WMU's Medieval Institute, plans to use the new manuscript's presence on campus as a tool for a graduate seminar in medieval studies she teaches. That seminar includes master's students in medieval studies as well as master's and doctoral students in history, English and other disciplines. They will be able to compare the WMU manuscript with others from the era that are available online, giving the WMU students a meaningful experience in working with a text that provided a foundation for medieval studies scholarship.

Both Steuer and Teviotdale expect the newly acquired manuscript to draw attention at WMU's annual International Congress on Medieval Studies, the world's largest gathering of medieval scholars, which is held each May at WMU. For the May 2017 congress, the manuscript will be on display in Waldo Library's Meader Rare Book Room. The text may become the focus of future congress sessions.

"This is now our earliest complete text, and it is transformational for our collection," Teviotdale says. "It is an acquisition that will be of interest far beyond our walls."

The Breslauer Foundation, which made the WMU acquisition possible, focuses on giving grants to libraries and not-for-profit institutions that collect rare books and manuscripts that will be housed in the United States. They also make grants to U.S. affiliates of foreign institutions.

Located on the third floor of Dwight B. Waldo Library, Special Collections is one of the repositories of primary resources and research materials in the WMU Libraries. It has more than 41,000 books. There are about 40 medieval manuscripts, modern and early modern printed editions, archives of modern writers, and fine press edition books. The holdings are organized into different research collections, emphasizing Cistercian and monastic studies, medieval studies, American women's poetry, historical children's books, pop-up and movable books, 19th- and 20th-century literature, fine printing and artists' books.