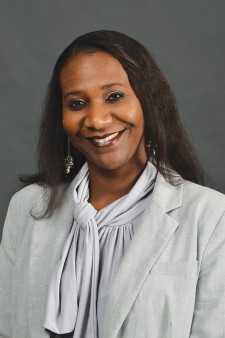 KALAMAZOO, Mich.—Dr. Sherine O. Obare, professor of chemistry and interim associate dean of the Western Michigan University College of Arts and Sciences, has been tapped to become the University's associate vice president for research.

Obare, whose appointment was effective Dec. 1, has a long track record of attracting external funding and collaborating internationally on research efforts that focus on developing novel materials and technologies with environmental applications. In her various positions at WMU, she also has served as a mentor to postdoctoral fellows, graduate and undergraduate students and high school and middle school students.

"Dr. Obare is the perfect fit for this leadership role," says Dr. Daniel M. Litynski, vice president for research, in making the announcement. "She is a seasoned and extraordinarily successful researcher with a strong administrative background who loves to mentor students and others. Her innovation and dedication will produce great accomplishments."

A WMU faculty member since 2004, Obare came to the University after completing a two-year Camille and Henry Dreyfus postdoctoral fellowship at Johns Hopkins University. She earned a bachelor's degree from West Virginia State University in 1998 and a Ph.D. in inorganic chemistry from the University of South Carolina in 2002.

Obare has served as interim associate dean of arts and sciences since February 2015, working with department chairs on budget and enrollment management; addressing contract, ethical and other personnel issues; advancing research and creative activity; reviewing internal funding sources and overseeing academic program review; and working on strategic planning. She also has served as acting director of the Africana Studies Program. Prior to being named interim associate dean and during her time in that role, she served as associate chair and graduate advisor for the Department of Chemistry.

"I am very honored to be selected to serve WMU in this important role," says Obare. "I look forward to working with our faculty, staff and students and providing them with the tools they require to rise to the challenges of addressing global research needs, while continuing to advance our discovery goals at the University. My collective experiences in developing my own research program, serving as a University administrator, providing service to federal granting agencies, and holding leadership positions in the American Chemical Society, will benefit me tremendously in my new role."

Active with campus initiatives that boost interdisciplinary work, student success and global engagement, Obare was recently instrumental in developing WMU's Gateway to Completion Program, designed to improve student retention, especially in the STEM disciplines. She also served as co-director of the Bridges to Baccalaureate program at WMU that was sponsored by the National Institutes of Health and aimed at recruiting and training underrepresented minority students from community colleges to study in the biomedical and behavioral sciences.

Obare's career at WMU has been characterized by research success and a number of accolades. She has garnered more than $4.5 million in external funding for her work, which includes developing materials for the detection and remediation of biological and chemical pollutants and understanding the environmental and health hazards of emerging materials. In addition, she has focused on developing strategies to improve education in the chemical sciences.

National awards she has received include the National Science Foundation CAREER award in 2006, the George Washington Carver Teaching Excellence Award in 2009, the International Union of Pure and Applied Chemistry Young Observer Award in 2009, the American Competiveness and Innovation Award from the NSF's Division of Materials Research in 2010 and the Lloyd Ferguson Young Investigator Award in 2010. In 2013, she was named one of the top 25 women professors in the state by Online Schools Michigan.

Obare has served as associate editor for the Journal of Nanomaterials since 2008 and has contributed to national research reports, including the 2011 NSF report titled Nanomaterials and the Environment: The Chemistry and Materials Perspective.

Obare replaces Dr. Paula D. Kohler, who retired from the University at the end of June.