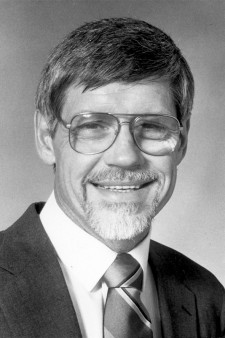 Dr. George M. Dennison, a former Western Michigan University provost and one of the most impactful educators in the history of the state of Montana, died Jan. 3 due to complications from non-Hodgkin lymphoma. He was 81.

Dennison came to WMU in 1987 and left in 1990 to head his alma mater, the University of Montana. He made a significant impact during his three years of service to WMU, then went on to become the longest serving president in UM history, leading that institution for 20 years.

Under Dennison's guidance, several new units and a major new position were instituted. Among them were the Office of University Assessment, Institute for Water Sciences, Division of Minority Affairs, School of Community Health Services, and position of associate dean for graduate education and research in each college.

In addition, Dennison is credited with helping to establish numerous new master's and doctoral degree programs, as well as with setting primary goals that included an increase in the racial and ethnic diversity of WMU's students and faculty members.

In 1988, he reorganized several areas within academic affairs to help the University increase the proportion of minorities within the population, with this reorganization including the creation of the Division of Minority Affairs.

Dennison also pushed for the recruitment of more minority faculty members, and under the leadership of then President Diether H. Haenicke, worked to create what is now the Walker Institute for the Study of Race and Ethnic Relations.

After a national search, Dennison was inaugurated as the 16th UM president on Aug. 15, 1990. His tenure as president marked a divergence from relatively short-term leaders and was a time of sustained growth and accomplishment for the university.

He also also built a culture of philanthropy across campus and among UM alumni and friends, increasing the campus endowment from $17.3 million to $120 million, and completed two fundraising campaigns for buildings, scholarships and other campus needs. The 2002 to 2007 campaign became the most successful fundraising endeavor ever launched by a Montana nonprofit.

In addition, Dennison led the effort to create the Montana Campus Compact, a statewide coalition to further campus-based public service; founded the Montana Commission on Community Service; and was a charter signer of the American Colleges and University Presidents Climate Commitment.

The University Theatre was renamed the George and Jane Dennison Theatre in 2012 in recognition of their many contributions to UM.

The UM obituary is available at news.umt.edu. The family is planning a memorial service in Montana in May.

Memorial gifts may be made to the University of Montana Foundation to support renovations for the Dennison Theatre or to a charity of choice.