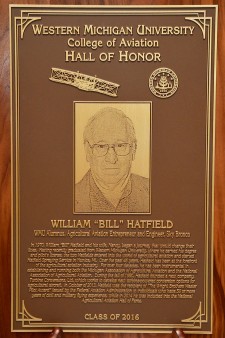 KALAMAZOO, Mich.—A pioneer in agricultural aviation and two national champion flight teams were inducted into the Western Michigan University College of Aviation Hall of Honor last month, while two others were honored for their efforts to diversify the college and the aviation industry.

Honored at the college's inaugural recognition dinner by induction into the Hall of Honor were:

Honored with 2016 Excellence in Diversity awards from the college were:

The honorees were feted at a Dec. 9 event held on WMU's main campus in Kalamazoo. A number of scholarship donors and the recipients of the scholarships they established also were announced at the dinner that is intended to be an annual event.

Hatfield was honored for 46 years of service that put him at the forefront of the agricultural aviation industry. The WMU alumnus and licensed pilot has operated out of Nunica first with a commercial spraying service and later founding a company focused on turbine conversions. Over four decades, he has been instrumental in establishing and leading the Michigan and National Association of Agricultural Aviation. He is the recipient of the Wright Brothers Master Pilot Award from the Federal Aviation Administration and was inducted in 2014 into the National Agricultural Aviation Hall of Fame.

Before WMU was a university and before there was a College of Aviation, the 1947 and 1948 Sky Broncos represented what was then Western Michigan College at the National Intercollegiate Flying Association's annual flight championship. Members of the team brought home the national trophy two years in a row, and for that feat, both teams were inducted into the Hall of Honor at the Dec. 9 event.

Lyman, who retired from the Kellogg Foundation in 2010, has supported WMU aviation for years and has specifically focused on creating opportunity in the industry for women and minorities. A 1968 alumnus, he has been instrumental in bringing millions of dollars in grants to the college from the Kellogg Foundation and the federal government. The funds helped to set a new strategic direction for the college, purchased new aircraft, and established the Diversity in Aviation Scholarship Program with a long-term endowment. Lyman, a certified pilot and licensed flight instructor, also served in 2002 as acting dean of the college and he served as chair of the College of Aviation's Advisory Board.

Rochon, now a first officer with United Airlines and based in Houston, first became familiar with WMU aviation through a summer camp opportunity as a youngster. He enrolled as an undergraduate and graduated in 2004. During his time at WMU, he was the founding member of WMU's Multicultural Association of Aviation Professionals, which evolved into the WMU chapter of the Organization of Black Aerospace Professionals. Since his graduation, he has repeatedly returned to his alma mater to serve as a mentor and role model to students who are part of the organization he founded. He also has served as a host for summer aviation camps around the nation to cultivate interest in aviation among underrepresented groups.

Founded in 1939, WMU's College of Aviation is among the oldest such colleges in the nation. The college offers the only comprehensive aviation program at a public university in Michigan, and with more than 900 undergraduate students, it is one of the largest aviation programs in the nation. The college offers state-of-the-art facilities and training equipment for students studying in one of three degree programs offered—aviation flight science, maintenance technology, and aviation management and operations.