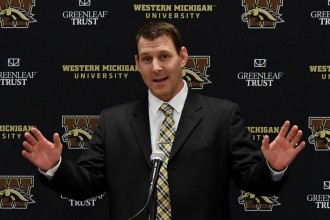 Lester at the press conference announcing his appointment.

Lester, who comes to WMU from Purdue University, completed  a Hall-of-Fame playing career at WMU as a four-year starter at quarterback from 1996 to 1999, leading the Broncos to a Mid-American Conference championship appearance his senior season. Since then, he has risen through the coaching ranks, making a stop as an assistant coach at his alma mater during the 2005 and 2006 seasons.

Lester began his coaching career in 2003 and most recently was the quarterbacks coach at Purdue this past season, where he mentored sophomore signal-caller David Blough. Blough threw for 25 touchdowns and 3,352 yards, averaging over 279 yards passing a game in 2016.

Lester came to the Boilermakers from Syracuse, where he served as quarterback coach from 2013 to 2015 and doubled as offensive coordinator in 2014 and 2015 as well.

Prior to working at Syracuse, he was the head coach at Division III Elmhurst (Illinois) College from 2008 to 2012. Over five seasons, he posted a 33-19 record for a .635 winning percentage, second highest in school history. In his final season in 2012, he led the Blue Jays to a 10-2 record and a CCIW conference championship as well as Elmhurst’s first-ever NCAA playoff appearance. It was just the third championship in school history and the first title since 1980. Lester was named the College Conference of Illinois and Wisconsin Coach of the Year that season.

Lester served as an assistant at North Central College (2007) and Elmhurst (2002-03). He was the head coach at Division II Saint Joseph's College in 2004, leading the Pumas to a five-game improvement his first season from the year prior (2-9 to 7-4 record) on his way to Independent Football Alliance Coach of the Year honors. In addition, Lester coached at the prep level, serving as offensive coordinator at Saint Benedict High School in 2001 and at his alma mater, Wheaton Warrenville South High School, in 2000.

Lester began his playing career at Western Michigan earning MAC Freshman of the Year honors in 1996. He went on to become a Second Team All-MAC selection his junior and senior seasons.

Lester finished his WMU career ranked fourth in FBS history in passing yards (11,299) and sixth in touchdown passes (89). Lester set 17 school passing records and eight MAC records. Following his senior season, in which he threw for 3,639 yards and 34 touchdowns, Lester participated in the 1999 Blue-Gray Classic.

As an assistant coach at WMU he coached quarterback Tim Hiller to MAC Freshman of the Year accolades in 2005. Lester was WMU’s first QB to throw for more than 11,000 career yards and Hiller went on to become the second.

A native of Wheaton, Illinois, Lester earned his bachelor's degree in mathematics from WMU in 2000. He was inducted into the Western Michigan Athletic Hall of Fame in 2011.

Broncos coming off a record season

Lester takes over a Western Michigan program that is coming off its best season in school history in 2016, finishing 13-1 with its first Mid-American Conference championship since 1988, and its lone loss to Wisconsin, 24-16, in the Cotton Bowl. The Broncos, who had never been ranked in the national polls before the 2016 season, finished 15th in the final Associated Press poll and College Football Playoff rankings, and 18th in the final coaches' poll.