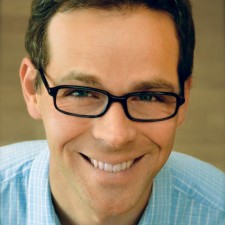 This is a man who, after earning a Ph.D. in physics from Harvard University pursued, not a post at a research facility, but a two-year Peace Corps assignment in the West African nation of Mali.

"My unconventional post-doc" is Humphrey's wry description of this turnabout that surprised some of his mentors in physics.

He was just following advice that he would, years later, share with a group of young physics majors at WMU: "Don't narrow your vision."

Today, the 1997 WMU graduate lives with his wife and two children in Vienna, Austria, where he heads the analytical services team for the International Atomic Energy Agency's Department of Safeguards. Often in international headlines, of late with regard to Iran's nuclear program, the mission of this United Nations body is to protect the world from the development and proliferation of nuclear weapons.

Humphrey's division analyzes samples taken during inspections at nuclear facilities around the world.

"Specifically, I'm responsible for the logistical aspect of that, getting the samples to Vienna from the field, and then out for analyses conducted across a global network of laboratories," he says.

Though not doing the scientific research he envisioned years ago, his training in physics is vital to this work.

"What we're shipping, it's not potatoes," he says. "These are uranium and plutonium samples. There are very strict rules and calculations you need to do to make sure everything is safe and secure."

As if this hasn't kept him busy enough, he renewed some of his WMU ties by publishing two physics books in 2015 with his former professors, Drs. Paul Pancella and Nora Berrah, who is now head of the University of Connecticut physics department.

Collaborating with his former mentors was a dream come true, Humphrey says, adding, "I wouldn't be where I am today without having had Western."

Twenty years ago, he was one of their brightest undergraduate students. He came to WMU on a Medallion Scholarship, which is among the largest merit-based awards in American higher education.

In those days, the talented undergraduate was convinced a long career in experimental physics was ahead of him, and never would have imagined working for the Peace Corps or the IAEA.

"The thing that distinguished me as an undergrad was the research that I did," he says. "I think it's a lot more common now, but back then it was pretty unusual for an undergraduate to do research. I'm absolutely certain that had I not done that at Western, I would not have had the opportunities that have come down the line."

Berrah says Humphrey was her "star student," and always was the most interested in the material. "I knew he would be at the top of his peers when he graduated. He's tenacious. He doesn't get discouraged," she says.

When Humphrey approached Berrah about working in her lab, for instance, she already had a graduate student and a post-doc researcher to train. Where would she get the funding to support a third person?

"But he didn't even care about being paid. He just wanted to learn," she says. So, as an undergraduate he co-authored papers with some of his professors, and researched alongside Berrah at a national laboratory.

"Back then I was convinced I was going to win a Nobel Prize," Humphrey says, chuckling. "From early on in my life, I felt like I had something special to contribute and that I just needed to find the right outlet to do so."

This ambition was bolstered at Harvard, where his experimentation involved a cryogenic hydrogen maser, essentially a cryogen-cooled atomic clock—the most stable clock ever built—that he and a team of researchers used to probe subtle collisional effects in hydrogen atoms. While at Harvard, Humphrey also was a NASA graduate student research fellow.

But this is where life circumstances and an open mind can put you in some wholly unexpected and yet wholly perfect-for-you places.

Laboring for so many years in atomic physics, focusing on the elemental aspects of reality, Humphrey felt he was missing out on the wider world and also didn't feel he was "contributing to society" in a discernible way.

"In physics research, you have to get so focused on one or two problems and get so deep into it that you lose a connection to everything else. It's part of the greater scientific enterprise, so it's important. But to do pure science turned out wasn't enough for me because you're not making a direct impact on society," he says.

After graduating from Harvard in 2003 with several awards to his credit, he "recalibrated" by traveling overseas, and took the Peace Corps post. In Mali, he built basic water and sanitation infrastructure for a year and then, as part of his assignment, did some computer programming work for the Centers for Disease Control and Prevention.

Over those two years, he found the Peace Corps slogan to be true—"it really is 'the toughest job you'll ever love.'" And though he was directly helping people, as desired, it wasn't exactly science, his first love. He needed to satisfy an insatiable inkling to marry two inclinations.

"In graduate school, I was doing too much science and not enough in the bigger picture benefiting society. In the Peace Corps, I was helping society, but not doing enough science.

"Nuclear nonproliferation seemed like the perfect intersection of the two. And that has turned out to be correct," he says.

As stepping stones toward his ultimate goal to work for the IAEA, for several years he held key positions at the U.S. departments of State and Energy.

Before being tapped by the IAEA in 2013, Humphrey was the team leader for a division of the U.S. Department of Energy that handles nuclear safeguards technology development. He managed more than 35 research and development projects at 12 U.S. national laboratories and oversaw a $15 million budget.

At the IAEA, his work is on a global scale as he manages a network of 21 analytical laboratories in 12 countries.

"Marc is a key asset to our division and to the IAEA overall," says Dr. Steven Balsley, head of the agency's nuclear material laboratory.

"The quality of his work is one of the reasons why the IAEA successfully delivers on its mission to promote the peaceful use of nuclear technology."

For Humphrey, the work perfectly blends two innate drives—to do science and to do work that he feels appreciably benefits society. He has found his "right outlet."

He shared that sentiment with physics majors as the speaker at a WMU physics department colloquium in 2014, saying, "I decided long ago that the most important ingredient to a successful career is finding your dreams and then having the courage—and persistence—to chase them down."

Read more alumni profiles and features such as expert insights and classnotes in the WMU Magazine, online at wmich.edu/magazine.