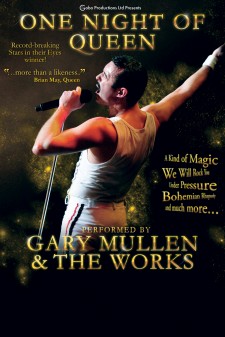 KALAMAZOO, Mich.—Gary Mullen and The Works will bring "One Night of Queen" to Western Michigan University's Miller Auditorium at 8 p.m. Friday, March 17.

In 2000, Gary Mullen won ITV's "Stars In Their Eyes Live" grand finale with the largest number of votes ever received in the show's history. His record 864,838 votes was more than twice that of the runner-up.

Mullen began touring on his own and in 2002 formed a band, The Works, to pay tribute to rock legend Queen. Since then, Gary Mullen and The Works have performed to sell-out audiences throughout the United States, the UK, Europe, South Africa and New Zealand.

'One Night of Queen'

With spectacular lighting and special effects, "One Night of Queen" recreates the look, sound, pomp and showmanship of one of the greatest rock bands of all time. Join Gary Mullen and The Works as they celebrate such chart-topping anthems as "We Will Rock You," "Bohemian Rhapsody," "Another One Bites the Dust," "Fat Bottomed Girls" and "We are the Champions."

Learn more about "One Night of Queen," featuring Gary Mullen and The Works, at garymullenandtheworks.com.

Part of the Lake Michigan Mailers Spotlight Series, "One Night of Queen," featuring Gary Mullen and The Works, at Miller Auditorium is welcomed by the Meijer, Zhang Financial, Pepsi and Seat n Sleep. Tickets are on sale now and range from $25 to $40. They can be purchased online at millerauditorium.com, by calling (269) 387-2300 or (800) 387-2312, or in person at the Miller Auditorium Ticket Office.

WMU students receive a 50 percent discount on most show tickets thanks to a fund established by the Office of the President. WMU students are limited to one discounted ticket per event with a valid Bronco Card. Tickets may be purchased in person at the Miller Auditorium Ticket Office or by telephone at (269) 387-2300. WMU students are required to show their Bronco Card when picking up tickets and upon entrance to the theatre.