KALAMAZOO, Mich.—Dr. Jeffrey Angles, Western Michigan University professor of world languages and literatures, was honored during a formal ceremony in Tokyo Feb. 17 as the 2017 winner of the prestigious Yomiuri Prize for Literature in poetry.

Angles won the prize—comparable to America's Pulitzer Prize—for his book of Japanese-language poetry "Watashi no hizukehenkōsen" ("My International Date Line"), which was published by Shichōsha in 2016.

The Yomiuri Prize for Literature, now in its 68th year, is given out in six categories each year: poetry, fiction, playwriting, criticism/biography, essays, and research/translation. All books published in the previous calendar year are considered for the award. Angles' book was, in the eyes of the judges, the best book of poetry published in Japan in 2016. 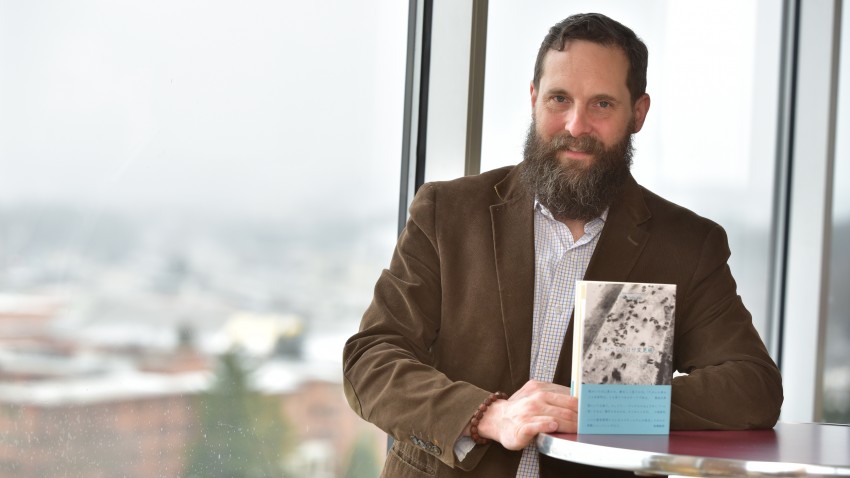 Dr. Jeffrey Angles, one of only a handful of non-native speakers ever to win the prestigious Yomiuri Prize for Literature

"This book of poetry taught me that there are special territories that only people who have two languages embedded deeply within themselves can reach," said Natsuki Ikezawa, a prominent Japanese novelist and one of the judges for the award, of Angles' book.

About the Yomiuri Prize

The Yomiuri Prize began in 1949, and like the Pulitzer Prize, is sponsored by a newspaper—the Yomiuri Shimbun, Japan's best-selling newspaper, which has a circulation of 9 million. Yomiuri winners receive a cash prize and an inkstone, an item that is used in East Asia when writing with a brush. For that reason, the inkstone has come to symbolize the act of writing.

Angles is one of only a handful of non-native speakers ever to win the award, a fact due in large part to the difficulty of mastering the Japanese language. He is the first American ever to win in the poetry category, and his win has led to a great deal of attention.

Announcement of the award drove many writers and commentators to note on social media that the judge's decision to give the award to Angles for his first book in Japanese was unprecedented.

"I couldn't be more astounded by all of this," Angles says. "This prize is usually reserved for extremely well-established writers. The list of past winners is like a who's-who in the world of Japanese literature."

Angles says the book was published in December, but it's sold well enough that it is already going into a second edition. While in Japan for the Yomiuri ceremony, he had the opportunity to visit a large Tokyo bookstore that featured a display with his image and name along with his book.

"Someone even recognized me in the bookstacks," he says. "I think it was my beard that did it."

Angles has been interested in the Japanese language since he first traveled to that nation as a 15-year-old. He earned his doctorate in Japanese literature from Ohio State University and has been a faculty member at WMU since 2004.

He says he has loved poetry, and Japanese poetry in particular, for many years, but his interactions with the Japanese poetry world started as a reader, researcher and translator. He has published a dozen academic books on Japanese literature that include translations and anthologies. He first rose to national attention when his 2010 book of translations "Forest of Eyes: Selected Poems of Tada Chimako" won not one, but two, literary awards in the United States.

His decision to try writing his own poetry in Japanese also came in the year 2010, when he participated in a poetry event in Japan, serving as Japanese-English translator so that four prominent poets from around the world could communicate with each other. Angles wrote his first poem in Japanese at that event, drawing praise from one of the four poets—Shuntarō Tanikawa, who is one of Japan's most famous poets.

Many of the poems in Angles' Yomiuri Prize-winning book derived their inspiration from his personal life, his experiences flying back and forth across the Pacific, negotiating the differences between two widely differing languages and cultures, his experiences with his family, and his memories of his childhood in Ohio. A number of the poems, he says, veer into the surreal and play with language in ways that bend the usual patterns of the Japanese language in new directions.

He's considering publishing an English-language version of the book.

"Many of the poems play with the sounds and particularities of the Japanese language," he notes, "but a lot of editors I know have been asking me to translate them. My family is asking too, but I think they're just worried I might have written something about them."