WMU hailed as a top producer of U.S. Fulbright Scholars 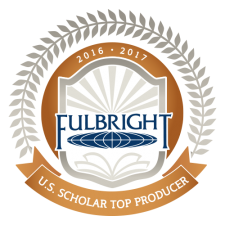 KALAMAZOO, Mich.—Western Michigan University is one of the nation's top producers of U.S. Fulbright Scholars, according to the U.S. Department of State's annual ranking of its flagship program, which was just published by the Chronicle of Higher Education.

With six WMU Fulbright Scholars awarded grants for 2016-17, the University is tied in 10th place as a top producer among the nation's research universities. The report was compiled by the Department of State's Bureau of Educational and Cultural Affairs.

"It's especially meaningful right now to be acknowledged for our success in producing Fulbright scholars," says WMU President John M. Dunn. "Global engagement has been central to this University's identity for decades, and at the same time our faculty members are active internationally, we have been host to record numbers of Fulbright students from other nations. As a campus and community, we're enjoying the best of both worlds."

WMU's Fulbright Scholars for the 2016-17 year and their areas of focus include:

About the Fulbright Program

Since its inception in 1946, the Fulbright Program has provided more than 370,000 participants—chosen for their academic merit and leadership potential—with the opportunity to exchange ideas and contribute to finding solutions to shared international concerns. Over 1,100 U.S. college and university faculty and administrators, professionals, artists, journalists, scientists, lawyers, and independent scholars are awarded Fulbright grants to teach or conduct research annually. The Fulbright U.S. Scholar Program operates in more than 125 countries throughout the world.

The Fulbright Program is funded through an annual appropriation made by the United States Congress to the Department of State. Participating governments and host institutions, corporations, and foundations in foreign countries and in the United States also provide direct and indirect support.

Learn more about the Fulbright Program at us.fulbrightonline.org.