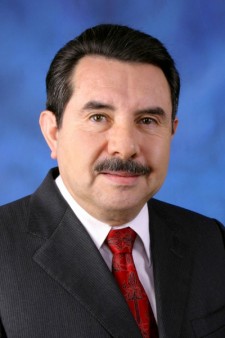 Acting at its March 15 meeting, the WMU Board of Trustees approved a recommendation to honor Flores, who is a WMU alumnus, with an honorary Doctor of Humane Letters degree. Flores, who has been previously honored by two Michigan governors and the Michigan Legislature, has led HACU since 1996.

A campuswide committee made the degree recommendation to WMU President John M. Dunn and the WMU board. The committee, led by Kathryn L. Hillenbrand, a master faculty specialist in the Department of Speech Pathology and Audiology, praised Flores' scholarly, professional and humanitarian leadership and noted that those qualities "comprise an exceptional model of the ideals and aspirations for students, faculty, staff and alumni of Western Michigan University."

Flores is HACU's third president. The association he leads is the leading voice for Hispanic-serving institutions and has nearly tripled its membership during his tenure. It now represents more than 400 institutions of higher education, collectively serving more than 2 million Hispanic students across 35 states, the District of Columbia and Puerto Rico.

Prior to taking the leadership position at HACU, Flores served as director of programs and services for the Michigan Higher Education Assistance Authority and the Michigan Higher Education Loan Authority. His responsibilities included policy analysis, legislative affairs, technical assistance and outreach services for all Michigan colleges and universities.

Flores has previously been honored by WMU with a Distinguished Alumni Award. Other honors he's received include a Lifetime Achievement Award from the Educational Policy Institute and the Hispanic Business Magazine Lifetime Achievement Award. He also has been the subject of a Univision broadcast capsule, "Orgullo Hispano," which features notable Hispanics and Hispanic-Americans.

Flores earned a bachelor's degrees in business administration and elementary education from Universidad de Guadalajara and Centro Normal Regional University, respectively. He earned a master's degree in counseling and personnel from WMU and a doctoral degree from the University of Michigan.