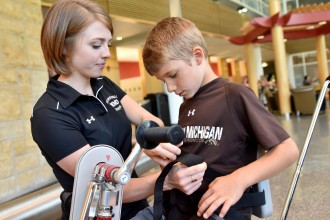 WMU's Kalamazoo-based occupational therapy program is ranked at No. 32 nationally, making it the state's highest ranking program in that discipline.

KALAMAZOO, Mich.— The latest annual U.S. News & World Report ranking of the top graduate programs in the nation shows Western Michigan University with eight programs ranked among the top 100 in their disciplines, four in the top 50 and two programs assessed as the best of their kind in Michigan.

In the latest round of rankings released March 14, WMU's occupational therapy program based in Kalamazoo is ranked at No. 32 nationally, making it the state's highest ranking program in that discipline. The University's speech language pathology program, at No. 46 nationally, is tied for recognition as that discipline's best such program in Michigan.

WMU graduate programs ranked among the nation's top 100 are:

A special online ranking offered by U.S. News this year assesses the relative diversity of the nation's law schools. The WMU Cooley Law School is tied with three other law schools for the No. 21 spot in the nation, and is ranked by a wide margin as the most diverse law school in Michigan.