Some 700 to participate in 2017 César Chávez March 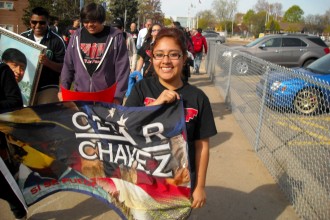 KALAMAZOO, Mich.—Some 700 students and members of the public are expected to participate in Kalamazoo's 23rd annual César Chávez March and program Thursday, March 30, from downtown Kalamazoo to the Bernhard Center on the Western Michigan University campus.

The march will begin at 9:30 a.m. with participants gathering at Bronson Park for a brief organizing session before marching to WMU. The public portion of the event will end with the march at about 10:30 a.m. This year's after-march program is by invitation only.

For more information, visit kalamazoocesarchavezmarch.weebly.com. Questions about the march may be directed to Mike Ramirez at miguel.ramirez@wmich.edu or (269) 387-3329.