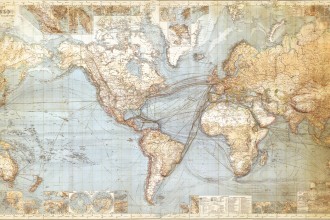 The Michigan State Geographic Bee is in its 29th year.

KALAMAZOO—For the 10th straight year, just over 100 young geography buffs from across the state will descend on Western Michigan University for the Michigan State Geographic Bee, testing their knowledge of the world while vying for a trip to Washington, D.C., to compete in the National Geographic Bee championship at National Geographic Society headquarters.

This year's event is Friday, March 31, and will bring the young semi-finalists from schools across the state and their families to the Fetzer Center's Kirsch Auditorium. This is the second level of the National Geographic Bee competition, now in its 29th year.

Bees were held in schools with fourth- through eighth-grade students throughout the state to determine each school's winner. School-level winners then took a qualifying test, which they submitted to the National Geographic Society. The society invited students with the top 100 scores in each of the 50 states, District of Columbia, Department of Defense Dependents Schools and U.S. territories to compete at the state level.

The state competition begins with preliminary rounds at 12:30 p.m., followed by the competition finals at about 2:15 p.m., says Dr. Lisa DeChano-Cook, WMU associate professor of geography and coordinator of the Michigan bee. The top geography student in Michigan will be selected from a field of 10 students who make it to the final round. The public is invited to attend the competition's finals portion only. State Rep. Aaron Miller, a WMU graduate, will serve as final round moderator.

Each year, thousands of schools in the United States participate in the National Geographic Bee using materials prepared by the society. The contest is designed to encourage teachers to include geography in their classrooms, spark student interest in the subject and increase public awareness about geography.

Founded in 1888, the National Geographic Society is one of the world's largest nonprofit scientific and educational organizations. With a mission to inspire people to care about the planet, the member-supported society offers a community for members to get closer to explorers, connect with other members and help make a difference.

For more information on the National Geographic Bee, visit nationalgeographic.com/geobee.