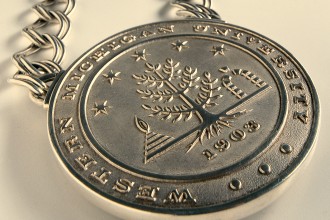 The meeting will be live streamed online.

KALAMAZOO, Mich.—The Western Michigan University Board of Trustees will meet in special session Wednesday, April 12, to consider selection of the ninth president of the University.

Gathering at 11 a.m. for a special formal session in the ballroom of Heritage Hall, trustees are expected to vote on the selection of a single candidate who has emerged from a search process underway since last fall. In recent weeks, the search has included a series of interviews conducted by the Presidential Search Advisory Committee, the resulting recommendation to the board of three finalist candidates and a final round of candidate interviews by trustees.

The successful candidate is expected to attend Wednesday's board meeting and be available to meet with members of the campus community and media.

The person selected will replace President John M. Dunn in the role of campus chief executive. Dunn announced in August 2016 that he would be retiring at the June 30 close of this academic year. He has served as WMU president for ten years. The confidential search for a new president has been guided by the Presidential Search Advisory Committee, led by WMU Trustee William Johnston and comprised of 22 members representing every part of the campus community. The committee is the largest ever involved in a WMU presidential search.

There are no advance materials available for the April 12 meeting. As is the case with all meetings of the WMU Board of Trustees, the event will be live streamed online at bit.ly/1Go6KLc.