Montgomery, a nationally known labor economist who played major roles in both the Clinton and Obama administrations, was selected by unanimous vote of the WMU trustees during a special meeting of the WMU board convened April 12. His selection follows a national search to find a successor to Dr. John M. Dunn who had announced a June 30 retirement date, but will now continue through July 31.

"We were fortunate to have a number of gifted candidates emerge through the search process," says WMU Trustee William Johnston, who led the 22-member Presidential Search Advisory Committee that helped identify Montgomery as the successful finalist. "Edward Montgomery's personal demeanor, commitment to transformational change and extensive academic background resonated with all of us involved in the search and spoke directly to the themes that emerged from our numerous listening sessions with university stakeholders."

During a more than 35-year academic career, Montgomery has held faculty positions at Carnegie Mellon and Michigan State universities as well as the University of Maryland, winning teaching awards some five times over the years.  He has been at Georgetown since 2010.

During President William Clinton's administration, Montgomery served as chief economist, then counselor and assistant secretary for the Department of Labor before being named deputy secretary of labor. In the latter role, the department's second highest position, he oversaw operations of a $33 billion department. 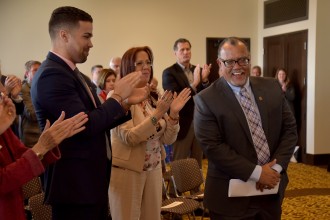 During President Barack Obama's administration, Montgomery was a member of the president's auto task force and led the inter-agency White House Council for Auto Communities and Workers. That position put him in a role national media dubbed "the Auto Czar" and affirmed his view of the synergistic role universities can play in regional economic development. He says the potential impact of a high-quality university is enormous and is a key reason the WMU presidency was so attractive to him.

"I was drawn to the opportunity to lead an up-and-coming student-centric comprehensive university with deep ties to the local and regional economy and community. Its strengths in the traditional arts and sciences, coupled with strong programs in such areas as aviation, engineering, business, medicine and others make it an institution with enormous potential" Montgomery says. "Job No. 1 for me is getting to know the faculty, staff, students and alumni communities. Working together, I know we can build on the strong foundation laid by President Dunn and make WMU the institution of choice for students from the state and region."

Montgomery will officially take office on Aug. 1. His three-year contract calls for him to have an annual salary of $450,000. A deferred compensation/retirement package will provide an additional $50,000 per year. Montgomery and his wife, Kari, a Michigan native, have three grown children—Lindsay, Elizabeth and Edward.

More than 35 years in academics

Montgomery earned a bachelor's degree from Pennsylvania State University and both master's and doctoral degrees in economics from Harvard University.
He began his academic career in 1981 with a position at Carnegie Mellon, where he was a faculty member for five years. He then spent a year as a visiting scholar with the Board of Governors of the Federal Reserve System before becoming a member of the Michigan State University faculty for four years. He joined the University of Maryland faculty in 1990, remaining there until his 2010 move to Georgetown. He also has been a visiting scholar at the Urban Institute.

As a researcher, Montgomery has focused on state and local economic growth, wage and pension determination, savings behavior, productivity and economic dynamics, social insurance programs, and unions. He has worked on research efforts with Kalamazoo's W.E. Upjohn Institute for Employment Research since the 1980s, visiting the Kalamazoo community a number of times.

For more than two decades, he has been a research associate at the National Bureau of Economic Research. Since 2006, he has been a fellow of Stanford University's Center for the Study of Poverty and Inequality. Since 2011, he has served on the Comptroller General's Educators Advisory Committee in Washington's General Accountability Office. In 2011, he was elected a fellow of the National Academy of Public Administration.

"Our Presidential Search Advisory Committee has done a superb job of finding a president with an extraordinary academic background and a tremendous track record in the public service arena," says WMU Board Chair Jeffrey Rinvelt. "We are delighted to welcome the Montgomery family to our campus and extended community and excited to see what the coming months and years will bring."

Founded in 1903, Western Michigan University is a learner-centered, discovery driven and globally engaged research institution with an enrollment of more than 23,000. Classified by the Carnegie Foundation for the Advancement of Teaching as a "higher research" university, WMU offers more than 250 degree programs, including 32 at the doctoral level, and many of its degree programs enjoy international renown. Committed to diversity in all its forms, the University attracts students from every state in the union and 100 other nations. U.S. News & World Report has listed WMU as one of the nation's "best national universities" for 26 consecutive years. More recently, Washington Monthly has ranked WMU as one of the nation's top-100 universities.