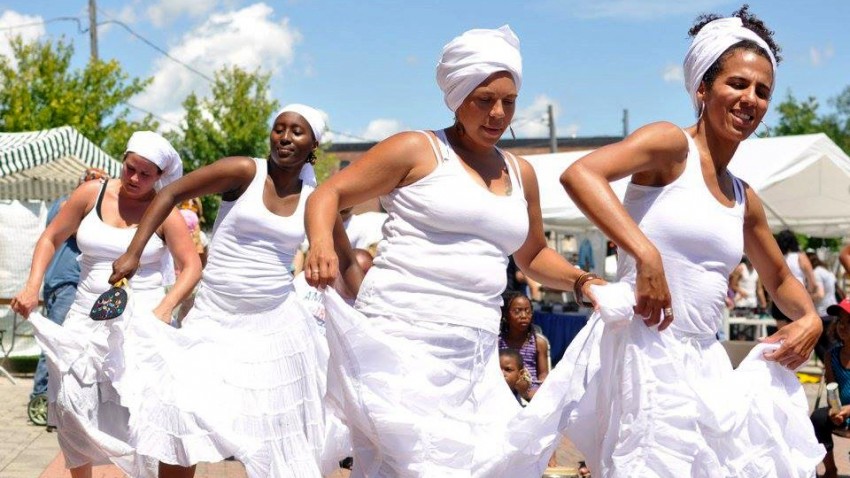 The audience will be treated to a screening of the first installment of the web-based documentary series, "The Spirit Moves with Us: Afrikan Dance in the Diaspora." The premiere, which will begin at 6:30 p.m. in 1025 Brown Hall, also will feature live dance performances by Heather Mitchell, Kama Mitchell and the Rootead Youth Dance Company, and Afrobeat dance performances by Brooklyn Washington and Oluchi Ebere. Events are sponsored by WMU's College of Arts and Sciences and School of Communication.

An interdisciplinary team led by WMU alum Katrina Ezeiyi is producing the documentary web series for several reasons, says Dr. Jennifer Machiorlatti, a WMU professor of communication in the film, video and media studies program, who acted as senior producer and co-director for the project.

"One of our goals is to increase cross-cultural knowledge about dance movement and practices because there is a lack of educational media about West African dance practices, even though it continues to gain popularity and has migrated to other global regions," Machiorlatti says. "Non-Western cultural practices and artifacts are often appropriated and diluted into pop culture trends seen as fashionable or cool, while the cultural significance and the history surrounding such practices are ignored. For the sincerity and depth of the culture to thrive, efforts must be made to show West African dance in its most authentic and genuine forms, as well as to explore their influences in other regions."

The project's inception dates back four years ago, when David Curwen, WMU professor of dance, contacted Machiorlatti about an advanced choreography course he was teaching, Choreography for the New Millennium. He proposed a collaborative project titled "Dance for the Camera." He also contacted Christopher Biggs, WMU assistant professor of music in the multimedia arts technology program.

Curwen's idea was to have dance students collaborate with video production and music composition students to create artistic and expressive dance videos. The collaboration was a huge success, and students have been collaborating on the dance videos ever since, with final projects culminating in a performance and screening event in WMU's Dalton Center dance studios. 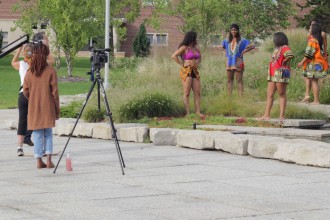 On the set of "The Spirit Moves with Us"

Machiorlatti's advanced video production class also has collaborated with theatre students in the Acting for the Camera course taught by Dwandra Lampkin, associate professor of theatre. During one semester Machiorlatti met with then-student and theatre major Ezeiyi. Ezeiyi, who was born in Nigeria, was nearing graduation and pitched the idea for a documentary and performance media production featuring how West African dance and culture has influenced many other parts of the world.

Knowing how challenging a feature documentary is to produce, Machiorlatti, who often collaborates with students on documentary and performance media productions, recommended a web series instead. That would allow a production team, consisting mainly of students, to work on individual episodes. Research started in 2014 and production started in 2015.

In addition to Machiorlatti and Curwen, web series collaborators include Ezeiyi, the series creator, co-producer and director; Micealaya Moses, instructor of English; WMU students and alumni Tirrea Billings, Nicholas Blackmeer, Gianna Capadona, Darius Gardener, Katie Grinnell and Brooklyn Washington; and K-College student Oluchi Ebere. One of the first to be interviewed for the web documentary series was Heather Mitchell, director of dance at the Kalamazoo-based Rootead Family Enrichment Center, whose dance troupe will perform.

Ezeiyi and Machiorlatti say it's critical for the practices and rituals surrounding West Afrikan dance to be captured in a popular visual format.

"We want individuals to have access to those cultural practices that have been part of a misrepresented history," Ezeiyi says. "Moreover, people outside those cultural histories can be exposed to Afrocentric dance to foster cross-cultural understanding and appreciation."