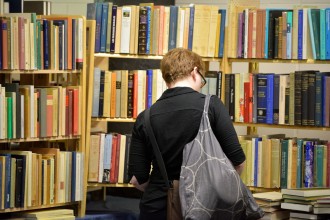 KALAMAZOO, Mich.—For four days in May, some 3,000 of the world's leading scholars on all topics medieval will converge on the Western Michigan University campus for an annual meeting that has become the largest international gathering of its kind.

WMU's 52nd International Congress on Medieval Studies will take place Thursday, May 11, through Sunday, May 14. The event will feature more than 570 sessions in locations across the WMU campus. Presenters will be scholars from 47 states, the District of Columbia and 34 nations. They include faculty members, museum curators and independent scholars, ranging from faculty members at the U.S. Military Academy and Harvard to academics at the Russian Academy of Sciences' Institute of World History.

Hundreds of the visitors will live in campus residence halls during the congress, and others will fill hotels throughout the area. For the four days of the event, they'll eat in dining facilities on the campus and in the wider community.

Congress sessions will focus on topics that range from medieval architecture and coins from the Middle Ages to the way the Middle Ages are portrayed in children's literature. Sessions also will be held on such perennially favorite topics as the epic poem "Beowulf," the Crusades and the King Arthur legends. And many sessions focus on the impact of the Middle Ages on modern life and popular culture. One session, for instance, looks at medieval sidekicks and examines sidekick characters in the 1990s films "Robin Hood: Prince of Thieves" and "Robin Hood: Men in Tights."

Papers on and discussions of many topics that have a contemporary ring to them can be found at the International Congress on Medieval Studies.

"Matters such as religious tolerance, race, criminality, sexuality and gendered behavior may not all have begun during the long span of the Middle Ages--many ancient peoples had to wrestle with these issues—but medievalists in all disciplines today continue to explore these topics," says Jana K. Schulman, director of WMU's Medieval Institute, which organizes the annual congress. "We continue to develop methodologies for inclusivity and diversity and seek to communicate a knowledge base about the period that will inform contemporary discourse on these important issues."

New this year, a performance festival

Running concurrently with the congress this year will be the new Mostly Medieval Theatre Festival, which will feature four different theatrical presentations in the Gilmore Theatre Complex. Intended to be offered biennially at the congress, presentations are designed to showcase and invigorate the global heritage of drama, music, dance and performance styles. This year's offerings include presentations focusing on comic dance, a Tolkien short story, French farce, middle Dutch plays and a 10th-century tragicomedy.

Special plenary lectures are scheduled for 8:30 a.m. Friday and Saturday, May 12 and 13, in the Bernhard Center's East Ballroom.

A workshop will focus on the skills involved in metal casting using soapstone to craft pewter ware. The exhibits hall, which is a favorite venue for both visiting medievalists and Kalamazoo residents, will feature the wares of more than 70 vendors, including publishers, used and rare book dealers, and purveyors of various medieval sundries.

Kalamazoo County residents and those with a valid WMU ID may attend the WMU International Congress on Medieval Studies at no cost. Local attendees may register on site in the lobby of Goldsworth Valley's Eldridge-Fox Halls if they have not pre-registered.

The Medieval Institute is a center for instruction and research in the history and culture of the Middle Ages and ranks among the top 10 North American institutes, centers and programs that focus on medieval studies. Its pioneering function was to introduce the first Master of Arts in medieval studies offered at a state-supported university in the United States.

The medieval congress began as a biennial conference in 1962. Sponsored by WMU's Medieval Institute, also established in 1962, it grew to become an annual event in 1970 and celebrated its 50th anniversary in 2012.

For complete details on all congress events, visit wmich.edu/medievalcongress.

Theatre, musical performances in spotlight at medieval congress | May 5, 2017