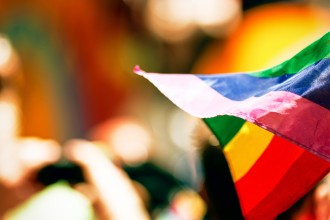 Performers include local artists, a cover band, a former American Idol contestant and drag performances. Tickets are $10 daily or $15 for two-day passes purchased in advanced at 340 S. Rose Street or by calling (269) 349-4234.

Performances on Saturday, June 10, kick off at 2 p.m. with DJ Dazzleship, and then local duo Pariah will come to the main stage. Grand Rapids indie/soul band Vox Vidorra will perform tunes sounding of Motown funk with a jazzy twist.

"For 2017, the performance lineup is an exciting mix of indie, soul, pop, reggae, R&B, rap and cover music as well as fabulous comedy and drag performances that showcase the diversity of the LGBTQ community," says Jay Maddock, executive director of OutFront Kalamazoo, the organization that hosts the event. "There is truly something for everyone at our 10th annual event. We're pleased to be able to share this high caliber entertainment with Kalamazoo."

Kalamazoo Pride is a fundraiser for OutFront Kalamazoo, formerly the Kalamazoo Gay Lesbian Resource Center, a 501(c)3 that serves the gay, lesbian, bisexual, transgender and allied community of southwest Michigan. Given that an estimated 10,000 people typically attend, it's also the largest fundraiser for the organization.

Saturday's popular vendor alley features affirming and inclusive organizations and businesses, as well as food and beverage vendors from all over southwest Michigan. There will also be family-friendly activities planned throughout the afternoon in the youth tent area.

For more than 20 years, OutFront Kalamazoo, formerly known as the Kalamazoo Gay Lesbian Resource Center, has sought to serve the gay, lesbian, bisexual, transgender and allied community of southwest Michigan.

The organization sponsors film festivals, documentary film series, book discussion groups, events in honor of Pride month and Women's History month, lectures, readings, and more. Much of its recent work has centered on youth programming and addressing the ramifications of bullying.