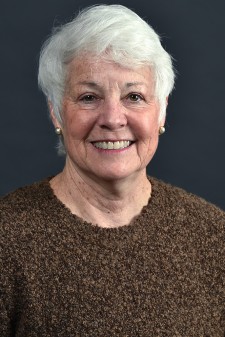 KALAMAZOO, Mich.—A longtime Western Michigan University professor and administrator has been honored by a national organization for a lifetime of work as a coach educator and developer.

The United States Center for Coaching Excellence has awarded Dr. Jody Brylinsky, associate provost for institutional effectiveness and a longtime professor of human performance and health education, its inaugural USCCE Coach Educator/Coach Developer Legacy Award. The award recognizes individuals who have been involved in the profession for a minimum of 20 years and made significant contributions to professional practice or academic knowledge in coaching education science.

Brylinsky, one of three professionals presented the award, was recognized at the 2017 National Coaching Conference May 22-24 in Atlanta during the Olympic Day Welcome Reception.

The organization notes that Brylinsky served for the past 22 years as professor and coordinator of the Master of Arts in Coaching Sport Performance program. Her responsibilities as associate provost include facilitation of the Universitywide and Academic Affairs Strategic plans and maintenance and reaffirmation of institutional accreditation through compliance with the Higher Learning Commission.

Brylinsky is a former high school coach as well as a college athletic director, coach and athlete. She was selected as a U.S. Olympic Committee Project Gold participant and is currently a consultant for a number of national governing bodies within the USOC and Special Olympics. In 2010, she was honored by the WMU Alumni "W" Club as Woman of the Year for contributions to the University and community. During her 26 years at WMU, her instruction and research have focused on all aspects of coaching education and the social and psychological development of athletes.