KALAMAZOO, Mich.—Western Michigan University's historic Heritage Hall has earned platinum status, the highest ranking possible, in the Leadership in Environment and Energy Design—LEED—system, which is the nation's most widely used green building ranking. 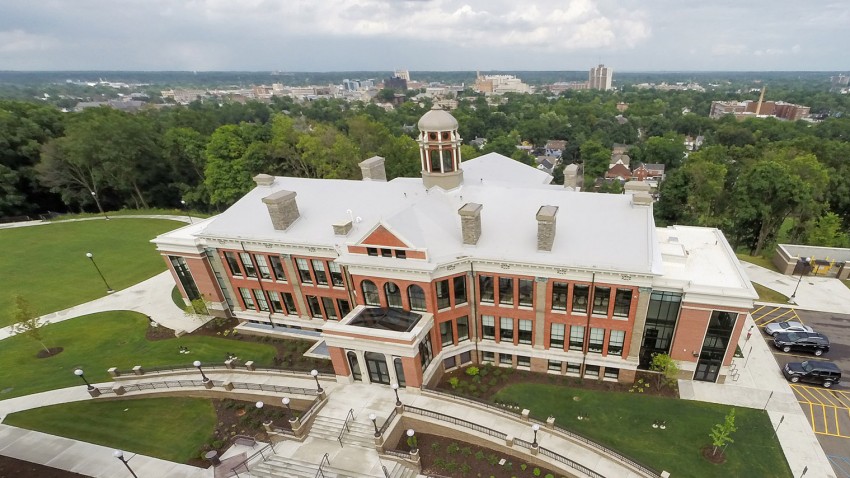 The University was notified June 2 by the U.S. Green Building Council, which manages the ranking system, that the renovated birthplace of the University has achieved its highest status, making the WMU facility the first LEED Platinum building in the Kalamazoo region. 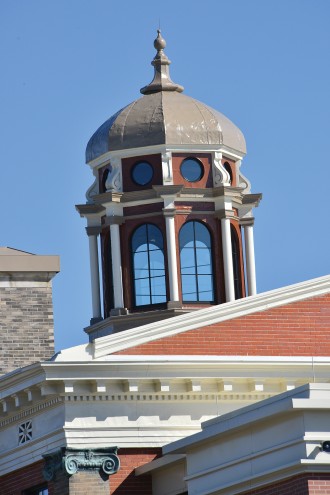 Heritage Hall, which was opened in 1905, was WMU's first building and sits atop Prospect Hill, overlooking downtown Kalamazoo. Acquisition of the property and the funds to build the facility played a large part in gaining state approval in 1903 to locate a new normal school in Kalamazoo. The school eventually evolved into Western Michigan University. In 2015, renovation of what is close to the building's original footprint was completed, and it was reopened as Heritage Hall, home to the WMU Alumni Center and a resource for the entire community. A major focus of the renovation effort was to turn the least energy efficient building on campus into one of the most efficient in the region and state.

"We set out to honor our campus and community's history and showcase how that history can be leveraged with the use of technology to build an energy efficient future," says WMU President John M. Dunn. "The LEED Platinum certification is one acknowledgement that we've accomplished both goals. I'm proud of our business and facilities teams who worked with historic preservation specialists and outstanding design and construction professionals to make our goals become realities."

Dunn notes the platinum ranking is extremely rare but was WMU's goal from the start of the project, leading it to pursue such elements as geothermal heating and cooling, LED lighting, energy efficient windows and a high level of repurposed historic building materials. The energy-saving elements alone make Heritage Hall more than 50 percent more efficient than buildings that use more traditional elements.

In addition to being Kalamazoo's first LEED Platinum building in any category the designation makes Heritage Hall:

While Heritage Hall is the University's first platinum building, WMU has 14 other buildings that have achieved LEED certification, including Sangren Hall, which was certified LEED Gold in 2014. Certification is pending for five additional WMU buildings.

Heritage Hall received statewide acclaim in 2016 when it earned the Governor’s Energy Award for Michigan in the public buildings category. It is also in the running for a number of other awards. 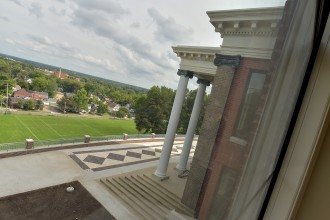 The building's architectural design was done by Tower Pinkster. Helping to ensure the project retained the historic character of the building was historic preservation expert Gene Hopkins from Hopkins Burns Design Studio of Ann Arbor, a firm that oversaw the renovation of the Michigan Capitol and the Grand Hotel. Christman Co. was the construction firm that oversaw the transformation.

Turning the building to one of the region's most energy efficient was one of the most challenging aspects of the project. The building had no insulation, no central cooling and utilized campus steam for heating. A series of chimneys throughout the building functioned only to permit fresh air to circulate in the building. Today, the fully occupied building uses less energy than was required when the facility was not in use and completely mothballed.

A small celebration ceremony at Heritage Hall will be held later this month when the LEED Platinum plaque arrives and is installed. Dunn says campus leaders like Vice President for Business and Finance Jan Van Der Kley and the team from facilities management under the leadership of Associate Vice President for Facilities Management Peter Strazdas are among those who will be celebrated at the event, along with their private-sector partners in the project.

"It's been a long road to get to this point, but those involved in the work had a vision of Heritage Hall as a facility that could reflect our partnership with the community and honor our shared values of innovation and commitment to education," Dunn says. "They persisted, and we're told every day that the community is a better place for it."